Campaldino 1289: The battle that made Dante (Campaign) (Paperback) 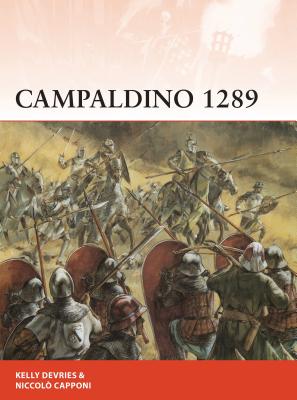 Campaldino 1289: The battle that made Dante (Campaign) (Paperback)

Campaldino is one of the important battles between the Guelphs and Ghibellines--the major political factions in the city states of central and northern Italy. It heralded the rise of Florence to a dominant position over the area of Tuscany and was one of the last occassions when the Italian city militias contested a battle, with the 14th century seeing the rise of the condottiere in Italy's Wars.

In this highly illustrated new study, renowned medieval historians Kelly De Vries and Niccolò Capponi have uncovered new material from the battlefield itself, as well as using all the available sources, to breathe new life into this colorful and fascinating battle.

Kelly DeVries is Professor of History at Loyola College in Maryland. He is the author of Medieval Military Technology, Infantry Warfare in the Early Fourteenth Century, Joan of Arc: A Military Leader, and Guns and Men in Medieval Europe.

Graham Turner is a leading historical artist, specializing in the medieval period. He has illustrated numerous titles for Osprey, covering a wide variety of subjects from the dress of the 10th-century armies of the Caliphates, through the action of bloody medieval battles, to the daily life of the British Redcoat of the late 18th century. The son of the illustrator Michael Turner, Graham lives and works in Buckinghamshire, UK.

"This 96-page book paperback explains how Campaldino's historical impact has been overshadowed by its literary significance because it plays a prominent role in the "Divine Comedy." It turns out that Dante fought in the battle and his impressions of the ferocious combat inspired his long narrative poem." - Toy Soldier & Model Figure