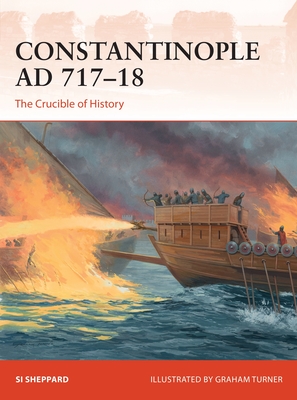 The siege of Constantinople in AD 717--18 was a key clash between the expanding Umayyad Caliphate and the Byzantine Empire, and one which influenced the fate of Western civilization. In this specially illustrated study, Si Sheppard examines the course of this pivotal campaign.

The siege of Constantinople in AD 717--18 was the supreme crisis of Western civilization. The Byzantine Empire had been reeling under the onslaught of Arabic imperialism since the death of the Prophet, whilst Jihadist armies had detached Syria, Palestine, Egypt, and Carthage from imperial control and were in the process of imposing their ascendancy at sea. The Empire had been reduced to its Anatolian and Balkan heartland, and Arab incursions threatened even this--Arab naval forces had appeared under the walls of Constantinople every year from 674 to 678. But all this was only a prelude to the massive combined-arms invasion force that advanced on the capital in 717.

This title offers a comprehensive study of the ensuing clash between the ascendant Caliphate and the Empire at bay. It details the forces available to each side, with their respective advantages and vulnerabilities, evaluating the leadership qualities of the rival commanders and assessing their strategic and tactical initiatives. It also accounts for the trajectory and outcome of the campaign and emphasizes the fundamental significance of the struggle. By holding the line, the Byzantines gave Europe enough time to develop at its own pace and emerge strong enough to face down its Islamic counterpart on equal terms. If Constantinople had fallen in 717, could Europe have endured as an independent entity? Could Christianity have survived as major religion? What would the future course of world history have been?

London-born Si Sheppard completed his Bachelors and Masters degrees in New Zealand before receiving his doctorate from Johns Hopkins University in the United States. He is currently an associate professor of political science and international relations at Long Island University in Brooklyn, New York, and has written several titles for Osprey focusing on the interrelationship between geography, technology, and strategy.

Graham Turner is a leading historical artist, specializing in the medieval period. He has illustrated numerous titles for Osprey, covering a wide variety of subjects from the dress of the 10th-century armies of the Caliphates, through the action of bloody medieval battles, to the daily life of the British Redcoat of the late 18th century. The son of the illustrator Michael Turner, Graham lives and works in Buckinghamshire, UK.