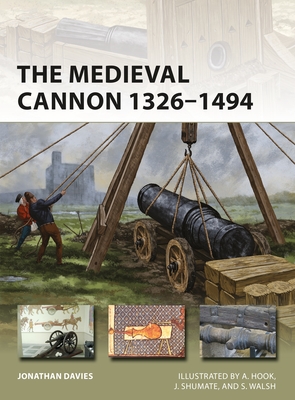 The first illustration of a cannon in Europe can be dated quite precisely to 1326. This book explores the development of gunpowder, the earliest appearance of cast-bronze cannon in Western Europe, followed by the design and development of the wrought-iron cannon. The wrought-iron hoop-and-stave method of barrel construction was a system that came to dominate medieval artillery design both large and small until the end of the 15th century, and saw the cannon used not only as a prestige weapon, but start to be used as a practical and terrifying weapon on the medieval battlefield. In 1453, the Ottomans' conquest of Constantinople, with their extensive artillery, marked the triumph of medieval firepower.

The book will focus on the technology and tactics of early European artillery on both sea and land, and assess its impact on medieval warfare.

Johnny Shumate works as a freelance illustrator living in Nashville, Tennessee. He began his career in 1987 after graduating from Austin Peay State University. Most of his work is rendered in Adobe Photoshop using a Cintiq monitor. His greatest influences are Angus McBride, Don Troiani, and Édouard Detaille.

Adam Hook studied graphic design, and began his work as an illustrator in 1983. He specializes in detailed historical reconstructions, and has illustrated Osprey titles on subjects as diverse as the Aztecs, the Ancient Greeks, Roman battle tactics, several 19th-century American subjects, the modern Chinese Army, and a number of books in the Fortress series. His work features in exhibitions and publications throughout the world.

STEPHEN WALSH studied art at the North East Wales Institute and has worked as a professional illustrator since 1988. Since then he has illustrated a variety of books and games including Settlers of Catan. His projects for Osprey include such diverse subjects as the battle of Otterburn, the Chinese army from 1937 to 1949, and the US Home Front in World War II.