US Soldier vs British Soldier: War of 1812 (Combat) (Paperback) 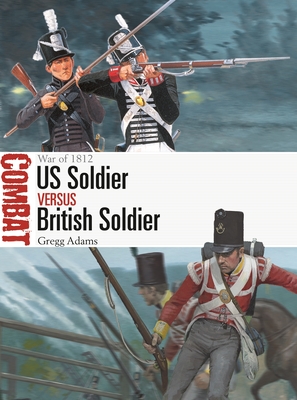 US Soldier vs British Soldier: War of 1812 (Combat) (Paperback)

Featuring full-color artwork and battle maps, this fully illustrated study investigates the US and British regular infantry's role, tactics, junior leadership, and combat performance on three battlefields of the War of 1812.

Between June 1812 and January 1815, US and British forces, notably the regular infantrymen of both sides (including the Canadian Fencibles Regiment), fought one another on a host of North American battlefields. This study examines the evolving role and combat performance of the two sides' regulars during the conflict, with particular reference to three revealing battles in successive years.

At Queenston Heights (October 13, 1812), the first American attack on the Niagara frontier saw the refusal of most of the New York militia to fight, leaving a small force of US regulars and a few militia facing a British force built around elements of two regular infantry regiments. At Crysler's Farm (November 11, 1813), an American force with a sizeable regular contingent clashed with a smaller British–Canadian force with regular elements during the US invasion of Canada. At Chippawa (July 5, 1814), the first battle of the conflict in which US and British regulars of roughly equal numbers and quality confronted one another in combat, the British commander's complacency was dispelled by the professional demeanor of the US regulars facing his troops.

Featuring full-color artwork and battle maps, this fully illustrated study investigates the US and British regular infantry's role, tactics, junior leadership, and combat performance on three battlefields of the War of 1812. The actions assessed here notably demonstrate the evolution of US regulars from their initial poor showing to an emerging professionalism that allowed them to face their British opponents on equal terms.

Gregg Adams earned a doctorate in physics in 1983 from the University of Missouri-Rolla. He is the author of several Osprey books including King's African Rifles Soldier vs Schutztruppe Soldier and US Marine vs German Soldier. He lives in Missouri, USA.

Johnny Shumate works as a freelance illustrator living in Nashville, Tennessee. He began his career in 1987 after graduating from Austin Peay State University. Most of his work is rendered in Adobe Photoshop using a Cintiq monitor. His greatest influences are Angus McBride, Don Troiani, and Édouard Detaille.