Slutever: Dispatches from a Sexually Autonomous Woman in a Post-Shame World (Paperback) 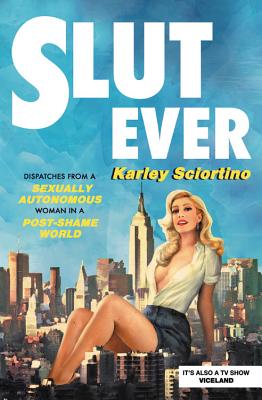 Slutever: Dispatches from a Sexually Autonomous Woman in a Post-Shame World (Paperback)


On Our Shelves Now. Click on title for location specific availability.
Slutever is a call-to-arms, a confessional memoir, and a slut manifesto—and it's all thanks to a sex-radical hedonist in a pink PVC mini dress.

"Slut" is a great word. It just sounds perfect-so sharp and clear and beautiful. It's one of those satisfying four letter words, like cunt and fuck. Slut also happens to be an anagram for lust, which is one of those divine coincidences that makes you wonder if God actually exists.

We're lucky that slut is such a great word, because it's safe to say that almost every woman will be called a slut at least once in her lifetime. Despite a slowly shifting sexual double standard, it's still taboo to be a woman who's openly sexual-let alone one who sleeps around. Now Vogue columnist Karley Sciortino is on a mission to reclaim the word "slut" to represent a person who seeks out visceral experiences through sex, and who isn't ashamed about it. Sluts are special. Sluts are radical. And sluts are skilled at time management, because they can handle multiple partners on rotation, plus their jobs and their blogs and their beauty routines. Not everyone is qualified for this coveted position.

Slutever is a thoughtful, first-person account of a modern woman, navigating sex, love, casual hookups, open relationships,, bisexuality, BDSM, breakups, sex work, sex parties, and the power of sexual agency, as told from the front lines.
Karley Sciortino is a writer, host, and producer, based in New York. She is the founder of Slutever, a website that explores sexuality through both humor and intellect. She also writes Vogue.com's sex and relationships column, Breathless, and is the creator and host of Slutever, a documentary TV series that explores sexual behavior and premiered on Viceland in 2018. She is also a regular contributor to Purple.
"Slutever is a funny, surprising, and ultimately enlightening book. Karley Sciortino is a natural-born killer of outmoded ways of thinking about love, sex, and personal agency. Generation slut has found a thoughtful, articulate voice."
— Christopher Ryan, Ph.D. (Co-author of Sex at Dawn: How We Mate, Why We Stray,and What It Means for Modern Relationships)

"Karley is the mad aunt every proto-slut should have. Hilarious *and* informative. I genuinely wish I'd had this book when I was a teen. I suspect it would have helped me make sense of the world and myself a lot faster."
— Stoya, pornographer