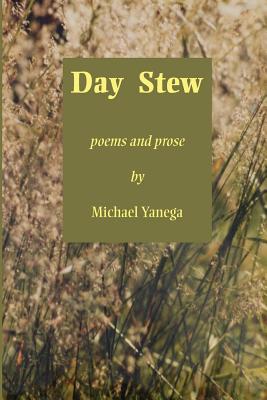 
Not on our shelves. Usually ships in 2-5 days.
(This book is nonreturnable. Nonreturnable books may take up to 3 weeks to ship. All sales final.)
DAY STEW is a celebration of the richness of daily experience. Any activity, whether it's walking the dog, reading the papers, following sports, observing nature, doing your job, being with family, watching TV, pondering the world, or just letting your imagination take you into the worlds of "what if..", can be a potential source of wonder and inspiration. The nearly two hundred poems and essays in this collection can be seen as examples of how considering the layers of meaning and possibilities in any experience can lead to a richer enjoyment, appreciation and understanding of the world you are immersed in every day. A few examples of the variety of subjects you will find in DAY STEW: an unforgettable gorilla encounter; a writer who imagines new lives for strangers; an introduction to Fred, one of my muses; how humanity uses music; the joys and heartbreaks of dogs in your life; a guy who makes labels (me); watching sunrises in your own yard, and around the world in exotic locales; rediscovering how to make one of the favorite dishes your Mom used to make (recipe included); being at the ballpark; realizing that singers never leave us; the emotional cost of piloting drones; how a guy decides when it's OK to hug; a dream Darwin might have had; and an achingly tender late night dialog. To quote from the title poem Day Stew: "This day is a stew that simmers from dark to dark ... a rich concoction blending the exotic and commonplace ... The shame would be not to notice.
Michael Yanega was born in New York City, the eldest of five children. He studied Architecture for one year at Pratt Institute in Brooklyn, N.Y., then switched to the Engineering School there. He met his wife Denise in the church choir in 1965. He graduated in January 1967, as a late graduate of the Class of 1966, with a B.S.E.E. degree. This led to a thirty-two year career in aerospace. Mike spent nearly four years in Florida supporting Minuteman missile tests, and some part-time work on the Apollo Saturn project. He and Denise were married in April 1967. They moved to the Seattle area in late 1970, where they still reside. They have two grown children and two granddaughters. They have always lived with at least one dog. Mike began writing poetry in the late 1970's while sitting in his car during lunch hours. He retired in 1999, after twenty years as a software engineer on the Inertial Upper Stage program. He began Bowfin Printworks (www.bowfinprintworks.com) to expand his interest in fonts that began in the 1980's. In 2008 he joined the Saltwater Writers group and returned to writing regularly. Most of the works in this book were first read to, and critiqued by, the thoughtful, generous and supportive members of this group. Mike continues attending their weekly meetings. He lives in Federal Way, Washington, with his wife Denise and their dog Pepper, a rescued terrier-mix.