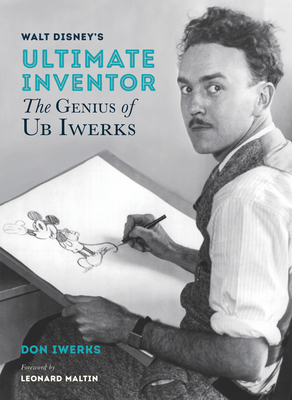 Disney Legend Ub Iwerks is most-often remembered as theanimator who worked directly with Walt Disney and first animated Mickey Mouseand Minnie Mouse, but as this new deluxe volume by Ub's son Disney Legend DonIwerks reveals, he was so much more. . . . he was Walt's ultimate inventor!

Gorgeous never-before-published photographs and fascinatingpersonal memories celebrate the half-a-century career of Ub, a self-taughtanimator who became an exceptional draftsman, prolific innovator, andall-around technical genius who directly collaborated with Walt to create someof the most loved moments throughout film and theme parks.

Even before the creation of Mickey, Walt established areputation as a technical leader in Hollywood and frequently relied on thecounsel, expertise, ingenuity, and creativity of a kindred spirit, lifelongfriend, and fellow virtuoso: Ub Iwerks. Up till now, Ub and his many technicalinventions and techniques have been largely unknown by the general public. Hisillustrious career consisted of dozens of innovative contributions, large andsmall, to both animated and live-action motion pictures, as well as the fieldsof optics, film processes, and special effects. He was also the major force behindthe design of special cameras, projectors, electronics, and audio for themepark projects, and much more.

The high standard set by Walt and Ub continues to inspireartists and technicians within The Walt Disney Company as they explore newavenues of quality entertainment. Here is a one-of-a-kind appreciation to anextraordinary man and an outstanding career, a record of his many inventionsand accomplishments, and a tribute from a grateful son to his remarkablefather.

Searching for that perfect gift for the Disney theme parkfan in your life? Explore more archival-quality books from Disney Editions:

• Holiday Magic at the Disney Parks

• The Disney Monorail: Imagineering a Highway in the Sky

• One Day at Disney: Meet the People Who Make the MagicAcross the Globe

• Marc Davis in His Own Words: Imagineering the DisneyTheme Parks

• Eat Like Walt: The Wonderful World of Disney Food

• Maps of the Disney Parks: Charting 60 Years fromCalifornia to Shanghai

• Poster Art of the Disney Parks

Don Iwerks followed his father, Disney Legend Ub Iwerks, to The Walt Disney Studios in 1950. There, among many leadership roles and accomplishments, Don developed cameras, projectors, and other technical systems, many of which are still used in Disney parks around the world, among them Circle-Vision 360, wide-gauge 3-D film systems, and the projection system for the wildly popular Star Tours attraction.

In 1986, after thirty-five years at Disney, Don joined fellow Disney executive Stan Kinsey to cofound their own company, Iwerks Entertainment, a maker of giant-screen theaters, simulation theaters, and 3-D-projection-based theme park attractions. In 1997, Don received the Gordon E. Sawyer Award, an Oscar from the Academy of Motion Picture Arts and Sciences Board of Governors. In 2009, Don Iwerks joined his father in the pantheon of Disney icons when he was presented with the prestigious Disney Legends Award. He most recently contributed to The Imagineering Story docuseries now streaming on Disney+.

Searching for that perfect gift for the Disney theme park fan in your life? Explore more archival-quality books from Disney Editions:

". . . an exhaustive look at [Ub] Iwerks' life and relationship with [Walt] Disney, first as friends in Kansas City and then as partners at Walt Disney Studios. . . . Don, a former Disney executive, includes in the book photographs, story sketches and movie posters. He also pays particular tribute to his father's mechanical inventions in special effects, such as cameras and printers, as well as his work on several Disneyland attractions, namely Pirates of the Caribbean, It's a Small World and the Haunted Mansion."—LA Weekly

"I am proud to have contributed a foreword to this invaluable history of Ub Iwerks's career written by his son. (It is also an uncommonly handsome volume.) Don Iwerks . . . describes his father's many inventions and innovations in detail but what I value most about this book is his description of Ub's unique relationship with Walt Disney."—Leonard Maltin

". . .Even longtime fans of [Ub] Iwerks and his notable achievements (for which he received two Academy Awards) have been largely in the dark about the specifics of his contributions, as well as the details of his relationship with Walt. That unfortunate gap in the historical record has now been rectified with the publication of Walt Disney's Ultimate Inventor: The Genius of Ub Iwerks, Iwerks' son Don's affectionate and highly informative chronicle of his father's years at Disney. Featuring never-before-published photos and engaging first-hand accounts of Iwerks' professional and personal experiences during a half-century career, Walt Disney's Ultimate Inventor transcends the typical industry bio, offering substantial technical details for the specialist, while remaining wholly accessible to the general reader. For anyone familiar with Don Iwerks' own illustrious career, the intimacy and knowledgeability of Walt Disney's Ultimate Inventor won't come as a surprise. Himself an Oscar-winning technical innovator who worked with his father for many years at Disney, Don Iwerks is singularly well-positioned to tell Ub Iwerks' story."—Animation World Network

"Walt Disney's lifelong friend and colleague Ub Iwerks has been the subject of a renowned documentary film as well as a highly-regarded biography. Now, his career as an innovator, inventor, and creative problem-solver has been documented in an entertaining and beautifully-illustrated focus on Walt Disney's Ultimate Inventor: The Genius of Ub Iwerks. The author of this fascinating work is no less an authority than Ub's son, Don Iwerks, who followed his father to The Walt Disney Studios where Don also developed technology still used in Disney parks around the world. This never-before-told facet of Disney biography and technology is a fascinating addition to the library of any Disney fan."
—Jeff Kurtti, Author and Disney Historian