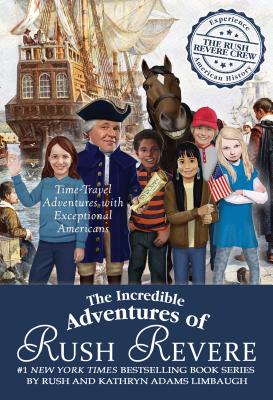 From the nationally syndicated radio host and #1 New York Times bestselling author Rush Limbaugh comes this special boxed set of five exciting Rush Revere titles, perfect for those who want to discover more about some of the most remarkable Americans in history!

Starting with the arrival of the Mayflower in 1620, Rush Revere and the Brave Pilgrims, you can join these daring English settlers as they arrive in America and celebrate the first Thanksgiving. Follow that with Rush Revere and the First Patriots and discover just how the talk of revolution and liberty spread from the bustling streets of 1760s Boston. Join the fight for freedom with Rush Revere and the American Revolution and be on hand for some of the most important battles of the war. Experience America’s first days as a nation and meet James Madison as writes the Constitution in Rush Revere and the Star-Spangled Banner! And finally, learn about all the first three presidencies of the United States directly from the men themselves and get to see George Washington, John Adams, and Thomas Jefferson in action in Rush Revere and the Presidency!
Rush Limbaugh was the host of The Rush Limbaugh Show—the nation’s highest-rated talk radio program, with an audience of more than 30 million—and was the #1 New York Times bestselling author of The Way Things Ought To Be; See, I Told You So; and the Adventures of Rush Revere book series. Visit OfficialRushLimbaugh.com.