A Matter of Death and Life (Hardcover) 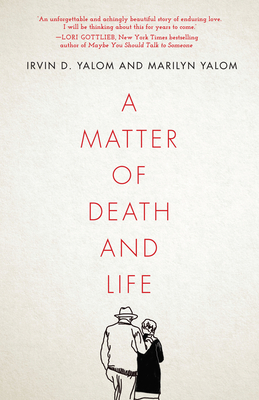 A Matter of Death and Life (Hardcover)

A year-long journey by the renowned psychiatrist and his writer wife after her terminal diagnosis, as they reflect on how to love and live without regret.

Internationally acclaimed psychiatrist and author Irvin Yalom devoted his career to counseling those suffering from anxiety and grief. But never had he faced the need to counsel himself until his wife, esteemed feminist author Marilyn Yalom, was diagnosed with cancer. In A Matter of Death and Life, Marilyn and Irv share how they took on profound new struggles: Marilyn to die a good death, Irv to live on without her.

In alternating accounts of their last months together and Irv's first months alone, they offer us a rare window into facing mortality and coping with the loss of one's beloved. The Yaloms had numerous blessings-a loving family, a Palo Alto home under a magnificent valley oak, a large circle of friends, avid readers around the world, and a long, fulfilling marriage-but they faced death as we all do. With the wisdom of those who have thought deeply, and the familiar warmth of teenage sweethearts who've grown up together, they investigate universal questions of intimacy, love, and grief.

Informed by two lifetimes of experience, A Matter of Death and Life is an openhearted offering to anyone seeking support, solace, and a meaningful life.

Irvin D. Yalom, emeritus professor of psychiatry at Stanford University, is the author of internationally bestselling books, including Love's Executioner, The Gift of Therapy, Becoming Myself, and When Nietzsche Wept. Marilyn Yalom's books include classics of cultural history such as A History of the Wife, Birth of the Chess Queen, and How the French Invented Love, as well as her final book released posthumously, Innocent Witnesses: Childhood Memories of World War II. They were married for sixty-five year