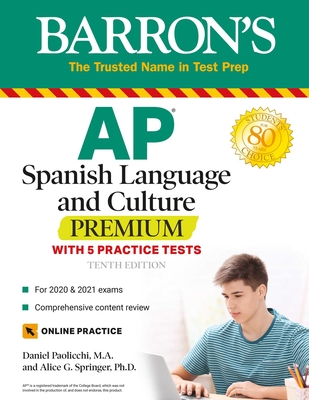 Publisher's Note: Products purchased from third-party sellers are not guaranteed by the publisher for quality, authenticity, or access to any online entitles included with the product.
​About the Author
Daniel Paolicchi was born in London and raised in Italy until age 12. He received his undergraduate degree from Tulane University, where Daniel majored in Spanish and spent his junior year abroad in Spain studying at the Universidad Complutense de Madrid. Daniel earned his Master’s degree in Spanish Literature from the University of Virginia. He has taught High School Spanish since 2003 and has been teaching at Montgomery Bell Academy (Nashville, TN) since 2008.

About the Publisher
In the 1930s, Manuel H. Barron opened a bookstore in Brooklyn, New York.

People from the community asked Mr. Barron about books that might be available to help their children study for the New York State Regents exams. After realizing there wasn't anything available, Mr. Barron created his own study guides.

80 years later, Barron's has helped millions of people prepare for their next step.