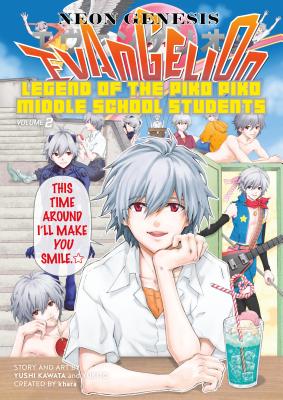 
On Our Shelves Now. Click on title for location specific availability.
Shinji! Rei! Asuka! And of course...Kaworu! The elite four students of the National Defense Middle School...otherwise known as NERV! They're training to prevent the "New Century Apocalypse"...but will all their training help them when they're demoing dating sims on the main stage at Tokyo's largest game show?

• The most famous anime franchise of the last 20 years!

• The latest anime movie, Neon Genesis Evangelion: 3.33 You Can (Not) Redo is available from Funimation.

• Each volume contains four opening pages in full color.
Khara, Inc. is a Japanese animation studio best known for its work on the Rebuild of Evangelion film tetralogy. Studio Khara is the primary an animation production studio. It was founded by Hideaki Anno in May 2006. Anno remains president of the studio. The name khara comes from the Greek word, meaning joy. The author lives in Tokyo, Japan."