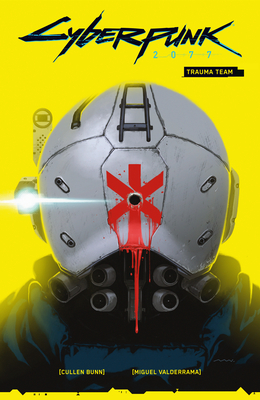 
On Our Shelves Now. Click on title for location specific availability.
Dive deeper into the world of Cyberpunk 2077!

Nadia, an assistant EMT for a privately-owned business known as Trauma Team International, is the sole survivor of a failed rescue mission turned shootout.

After she agrees to continue work for an upcoming extraction mission, Nadia discovers that her new extraction subject is Apex—the man who's responsible for Nadia's former team members' deaths. A hundred floors high in a skyscraper filled with members of Apex's rival gang, Nadia and her team must complete the extraction.

Collects Cyberpunk 2077: Trauma Team #1-4.
Cullen Bunn is an American writer of comic books, short stories and novelist, known for his work on comic books such as Deadpool Marvel Comics, The Damned and The Sixth Gun for Oni Press, and Harrow County for Dark Horse. His novel work includes the middle reader horror series Crooked Hills and his short story work includes the anthology collection Creeping Stones & Other Stories. In 2011 Bunn was nominated for a Ghastly Awards, and won Broken Frontier's Best Writer Independent Award. In 2012 he was nominated for a Bram Stoker Award and an Eisner Award.