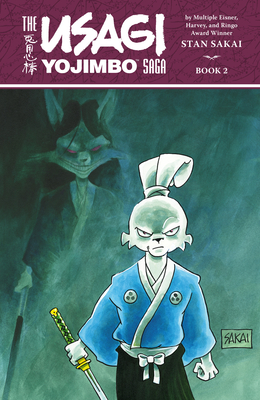 This collection includes Usagi's first encounters with the Lord of Owls, Inspector Ishida, and more, and is highlighted by the Eisner Award-winning Grasscutter, a grand tale assembling nearly all the series' characters in a struggle over the grasscutting sword of Japanese legend, with the fate of the nation in the balance!

Collects Usagi Yojimbo Volume 3 #7-#30 and Usagi Yojimbo: Green Persimmon!
Stan Sakai was born in Kyoto, Japan, grew up in Hawaii, and now lives in California with his children, Hannah and Matthew. He received a fine arts degree from the University of Hawaii and did further studies at the Art Center College of Design in Pasadena, California. His creation, Usagi Yojimbo, is the story of a samurai rabbit living in a feudal Japan populated by anthropomorphic animals. It first appeared in Albedo Comics in 1984. Since then, Usagi has appeared on television as a guest of the Teenage Mutant Ninja Turtles; and as toys, on clothing, in comic books, and in a series of trade paperback collections. In 1991, Stan created Space Usagi, the adventures of a descendant of the original Usagi, dealing with the samurai in a futuristic setting. Stan is also an award-winning letterer for his work on Sergio Aragonés's Groo: The Wanderer, the Spider-Man Sunday newspaper strips, as well as for Usagi Yojimbo. He is the recipient of a Parents' Choice Award, an Inkpot Award, multiple Eisner Awards, two Spanish Haxturs, an American Library Association Award, and a National Cartoonists' Society Division Award. Usagi Yojimbo Book 12: Grasscutter was used as a textbook in Japanese history classes at the University of Portland.