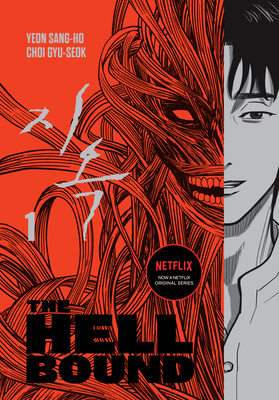 
On Our Shelves Now. Click on title for location specific availability.
Available for the first time in English! Experience the intense and heart-pounding horror of The Hellbound volume one by Yeon Sang-Ho, director of the internatonal hit and cult favorite film Train to Busan and cartoonist Choi Gyu-Seok, creator of the acclaimed webtoon Songgot.

Fear and panic spread as a sinister phenomenon marks individuals for certain death.

One day, you will receive a message from an unknown sender. The message will only include your name, the fact that you are going to hell, and the time you have left to live. There is nowhere to run, nowhere to hide—no escape. When the time counts down to zero, supernatural beings manifest to condemn you to hell. As the nation falls into unrest, a new religious sect begins to interpret the bizarre occurrence as the will of the divine. Could this be a sign of something grander—a blessing in disguise, a holy reckoning, or an evil curse? Amid social chaos and increasing hysteria, the people must find a way to survive this inexplicable terror.

Now a Netflix series!
Yeon Sang-ho (b. 1978) is a South Korean director and screenwriter. In 2012, his first film The King of Pigs was the first South Kore­an ani­mat­ed fea­ture film to be pre­sent­ed at the Cannes Film Fes­ti­val. In 2016, he came back to Cannes with Train to Busan, a genre film pre­sent­ed dur­ing a mid­night screen­ing which would become a huge inter­na­tion­al suc­cess. A mul­ti­dis­ci­pli­nary artist, he became the genre mas­ter in South Korea with var­i­ous projects: super-hero film Psy­choki­ne­sis, hor­ror TV series The Cursed, and comics web series Hell.