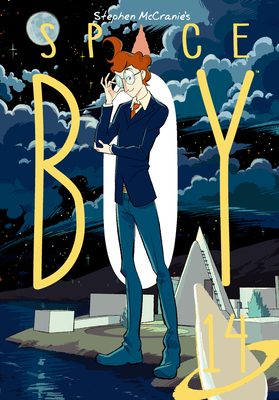 
On Our Shelves Now
Something dark grows at the heart of the First Contact Project.

Amy settles into her new routine of exercise, work, and chatting with Oliver, trying to put the specter of homecoming behind her. But life in the FCP is anything but boring, as she and Qiana begin unravelling the conspiracy within the agency, one which takes them all the way to the office of the Director himself!

Meanwhile in Kokomo, Cassie, Tammie, and Schafer begin their own investigation into Amy’s disappearance, and far out in space, Oliver has a revelation.

All that and more in the latest exciting volume of Stephen McCranie’s Space Boy!

Stephen McCranie is the writer and illustrator for Space Boy and Mal and Chad, all-ages graphic novel series. Stephen grew up drawing comics from an early age. He eventually earned a Fine Arts degree at the University of New Mexico. Stephen originally created Mal and Chad as a comic strip for the UNM school newspaper.
“Stephen McCranie’s Space Boy, is a wonderful book full of entertaining characters, big ideas, and fun visuals.”—Joe Grunenwald, Comics Beat