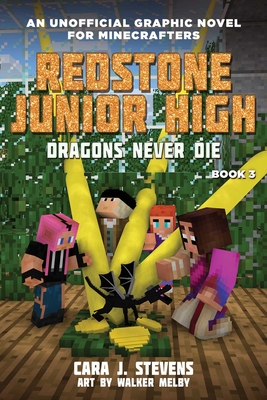 This is book number 3 in the Redstone Junior High series.

For boys and girls who love Minecraft, a graphic novel adventure that uses over 750 images to transport young readers into the world of the game they love most.

When Uma shows up at Pixel’s house over summer break, it’s not just for a friendly visit. It’s to bring chilling news of the Ender Dragon’s death. Never before has their world suffered such a great loss. Uma now holds the one item that the Ender Dragon left behind and both girls must protect it with their lives.

The girls return to Redstone Junior High with a sense of purpose and a secret much bigger than them both. But what used to be a safe haven for students has been ravaged by the Ender Dragon’s destroyer, Smite, and his evil cohorts. Not only has the school been ransacked, but it’s overrun with mobs seeking protection from a wave of attacks on their homes. Pixel, Sky, Uma, Principal Redstone, and the other students must teach these mobs to fight back before Redstone Junior High becomes a battlefield and the Ender Dragon’s legacy is lost forever.

Will the Ender Dragon finally be avenged or will Smite and his crew wipe out the last hope for a return to peace and normalcy?
Cara J. Stevens has a deep and abiding love for video games, science fiction and writing. She began her career designing interactive games and stories based on books and is happy to come full circle, creating stories based on video games. She has written nine other books for kids, including the novel Dragon School. When she’s not writing or hanging out at the beach, she can be found playing pinball, WiiU, and classic Atari games. Cara lives in Old Greenwich, Connecticut with her husband, two children, and a loud, fluffy dog named Oliver.

Walker Melby is an avid gamer and illustrator who lives in Los Angeles.