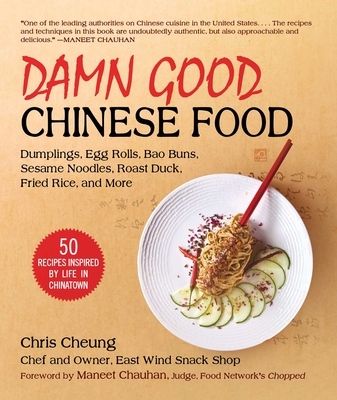 
On Our Shelves Now. Click on title for location specific availability.
From acclaimed chef Chris Cheung comes a cookbook inspired by growing up in New York's Chinatown—with a foreword by Maneet Chauhan, celebrity chef, author, and judge on The Food Network's Chopped

There is a particular region in today's renaissance of Chinese cooking that is often overlooked: the food of Chinatown.

Like many of his predecessors, chef Chris Cheung was inspired by the place where he grew up, lived, worked, and ate. From take-out orders at tiny hole-in-the wall teahouses to the lush green vegetables piled high at the markets, celebration dinners at colossal banquet halls to authentic home-cooked meals, Chinatown’s culinary treasures and culture laid the groundwork for his career as a chef and serve as the creative force behind this book.

Through personal insights, stories, and recipes, the author walks you through the markets, restaurants, and streets, providing a stunning portrait of this important cuisine and its countless contributions to American culture.
Chris Cheung is a New York native and grew up in the heart of Chinatown. He was brought up around great Cantonese food, where he undoubtedly picked up his affinity for Chinese cuisine. Right out of school he started working for world-famous chefs like Jean-Georges Vongerichten, Nobu Matsuhisa, and Masaharu Morimoto. Later, he became part of the opening kitchen staff at Jean-Georges, cooking alongside Wylie Dufresne and Didier Virot. Chef Cheung also had the privilege being Anthony Bourdain's guide to New York's Chinatowns on the hit show No Reservations and has served as a guest judge on The Food Network's Chopped and Beat Bobby Flay. His inspiration for Chinese cooking took him to Shanghai where he prepared banquets in the country side farming and fishing villages. There he learned the nuances of Shanghai cuisine and was blown away by its farm-to-table and sea-to-table style of cooking. Currently, he is the chef and owner of acclaimed restaurant East Wind Snack Shop, which has two locations in Brooklyn.

Maneet Chauhan is a celebrity chef, author, and judge on the Food Network's hit show Chopped, and won the James Beard Award of Excellence winner. She has received glowing accolades from a vast array of media for her globally-inspired culinary acumen. The only Indian female to ever compete on Iron Chef and lauded by Bon Appétit, USA Today, Time, Esquire, Travel & Leisure, Gourmet, Town & Country, Business Week, and O Magazine, as well as garnering a stunning three-star review from the Chicago Tribune, Chef Chauhan is a celebrated chef who is an inspiration to many, and a force to be reckoned with. She authored the book Flavors of Our World in 2013 and her forthcoming book Chaat: The Best Recipes From the Kitchens, Markets, and Railways of India published in October 2020.
Praise for Damn Good Chinese Food:

"Having burnished his culinary skills in the kitchens of Jean-Georges Vongerichten and Nobu Matsuhisa, the chef Chris Cheung returned to the food of Manhattan’s Chinatown, where he was born and raised, to create his casual East Wind Snack Shops in Brooklyn. In 'Damn Good Chinese Food,' his first cookbook, Mr. Cheung is your guide to Chinatown (as he was for Anthony Bourdain) and its vibrant markets. His book outlines equipment and techniques, and gives 50 recipes for dishes from the Chinese American canon, many with refinements. These include pungent sweet and sour pork Peking style; three cups cauliflower, which cleverly swaps out the usual chicken for the vegetable; designer egg drop soup; briny black bean clams; pork belly bao buns; and many, many dumplings, explaining the Chinatown pedigree and his personal take. Be prepared to use MSG; Mr. Cheung makes a cultural argument for it." —The New York Times

"My friend Chef Chris Cheung is a resident expert in Chinese cuisine on Beat Bobby Flay. Now that he has published a book, I can learn how to make dumplings properly!" —Bobby Flay

"With a love for Chinese ingredients, techniques, and flavors, Chris has rapidly established himself as one of the leading authorities on Chinese cuisine in the United States. . . . The recipes and techniques in this book are undoubtedly authentic, but also approachable and delicious. These dishes will excite you and quickly become family favorites. I am ready to dive into these mouthwatering recipes and look forward to cooking up a delicious, Chris-inspired storm in my own kitchen!" —Maneet Chauhan, judge, Chopped, winner, Tournament of Champions II, and author, Chaat

"The stories Cheung shares reflect his upbringing in New York's Chinatown, and the recipes celebrate the flavors, techniques, and culture of this delicious neighborhood." —Food & Wine

"Damn Good Chinese Food shines as a celebration of Chinese markets, the people who run them and shop in them, and the food and traditions that shape Chinese culture in America." —Plate Magazine

"A look into a window of Chinatown that goes unsung—the people, the community, and the food! As the owner of one of the oldest restaurants in Chinatown, I'm totally inspired by Chris's writing, and the recipes are spot on." —Peter Lee, owner, Hop Kee Restaurant

"Chris Cheung is the most New York chef I've ever met. Listening to him speak about growing up in Chinatown is a study in descriptive, textured storytelling. I can instantly smell and taste the food that he's talking about. Mott Street in the late 80s and 90s was where I spent Sunday mornings with my father. Chris's recipes in Damn Good Chinese Food bring me back to the place and time that food became the most important thing in my life." —Ilan Hall, winner, Top Chef; former host, Knife Fight

“My earliest dining memories come from wondrous meals at Chinese restaurants, where the ingredients, flavors, and aromas captivated me. Damn Good Chinese Food reminds me of the joy of discovery. Chris Cheung's inventive and delectable recipes respect tradition while he adds his heartfelt personal touches. This is an engaging book to be treasured.” —Drew Nieporent, restauranteur, Nobu, Batard, Tribeca Grill

"Chris Cheung taps into that nostalgia of 1970s Chinatown in his cooking, while bringing a modern sensibility to his recipes. We’re both NYC kids of the 70s, and while our backgrounds may be different, we share a deep love for dumplings and buns. And Chris’s dumplings are divine! I have twice profiled Chris and his cooking for my weekly food segment, Neighborhood Eats, on WABC TV, and both times I ate my way through the shoot, gorging on his delicious creations. His cooking directions are so simple, now even I can recreate Cantonese classics in my own kitchen! Dumplings, here I come!" —Lauren Glassberg, WABC TV Anchor and Reporter

"Chef Chris Cheung has spent much of his career honoring his Chinese heritage by bringing the cuisine of his Chinatown childhood into the 21st Century. The flavors and techniques are traditional, but Chris has a way of adding his own finesse, learned from some of the country’s greatest chefs as well as his own decades of experience. This book reflects all of that and brings it to your kitchen." —Brett Thorn, senior editor, Nation's Restaurant News

“More than damn good! A beautifully written and photographed journey shared from the vault of Chris Cheung’s soul, where I dare to imagine his ancestors sit and sip tea, share snacks, and impart their gems of flavor, techniques, and stories. . . . This book captures Chris’s unique humor, love for eighties pop culture, admiration for great Chefs, Chinese traditions, family, community, and a genuine respect for food and the intersection of the human experience. You’ll smile, laugh, ohh, ahh, marvel, and be moved by his recipes, stories, and anecdotes. Should you add this to your cookbook collection? Damn skippy!” —Jameeale Arzeno, culinary director, James Beard Foundation 2018–2020

"Thanks for making it all make brilliant sense." —Anthony Bourdain, on Chris Cheung's knowledge of New York's Chinatowns

"A skilled craftsman." —The Village Voice

"I’ve come to know Chris as a custodian of Chinatown’s food traditions and Cantonese-American cooking. But he’s also a thoughtful interpreter of Chinese cuisine. (Have you tried his Incredible Har Gow? Why not?) There’s a reason I’m always happy to go out of my way to meet a good friend at the southern entrance to Prospect Park—because I can grab food from East Wind Snack Shop." —Chris Crowley, writer, New York Magazine

"Many chefs claim Chinatown as a point of reference, but Chris Cheung was raised in its old diners, dim sum halls, fishmongers, and grocery stores. His faithful yet inventive cooking is an essential form of storytelling and historical recovery." —Herb Tam, curator, The Museum of Chinese in America

"A homage to [Chinatown's] bygone working-class coffeehouses, run by immigrants who, like Mr. Cheung’s grandparents, came from Taishan, in Guangdong Province." —The New York Times

"I picked up my life and moved just to be closer to this Brooklyn dumpling spot. . . . I looked down at my table full of gorgeous stir-fried vegetables, plump dumplings, and pork belly bao, and knew: I was home." —Bon Appétit

"Stellar dumplings . . . The pork dumplings and dry-aged beef potstickers are certainly fantastic, but it’s chef Chris Cheung’s gwa bao-style bun, which places caramelized pork belly on top of the bun rather than inside of it, that has earned the most street cred among in-the-know diners." —Eater