Climate in Crisis: Who's Causing It, Who's Fighting It, and How We Can Reverse It Before It's Too Late (Paperback) 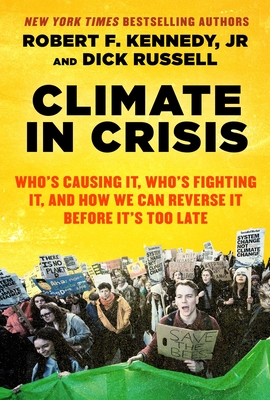 Climate in Crisis: Who's Causing It, Who's Fighting It, and How We Can Reverse It Before It's Too Late (Paperback)


On Our Shelves Now. Click on title for location specific availability.
The science is overwhelming; the facts are in. The planet is heating up at an alarming rate and the results are everywhere to be seen. Yet, as time runs out, climate progress is blocked by the men who are profiting from the burning of the planet: Energy moguls like the Koch brothers and ExxonMobil CEO Rex Tillerson. Powerful politicians like Senators Mitch McConnell and Jim Inhofe, who receive massive contributions from the oil and coal industries. Most of these men are too intelligent to truly believe that climate change is not a growing crisis. And yet they have put their profits and careers ahead of the health and welfare of the world’s population—and even their own children and grandchildren. How do they explain themselves to their offspring, to the next generations that must deal with the environmental havoc that these men have wreaked?

With a new introduction from the authors, Climate in Crisis takes a very personal look at this global crisis, literally bringing it home.
Robert F. Kennedy, Jr. is a New York Times bestselling author and one of the nation's leading environmental activists. His writing has been included in anthologies of America's best crime writing, best science writing, and best political writing. He is president of Waterkeeper Alliance, the world's largest clean water advocacy group; a professor of environmental litigation at Pace University Law School in White Plains, NY; and a senior attorney at the Natural Resources Defense Council. Mr. Kennedy is a former Assistant District Attorney in Manhattan. He cohosts thre weekly radio show Ring of Fire.

Dick Russell has written for such varied publications as Time, Sports Illustrated, and the Village Voice.His books include The Man Who Knew Too Much, Black Genius, and On the Trail of the JFK Assassins. He is also the coauthor of several New York Times bestsellers, including American Conspiracies, 63 Documents the Government Doesn't Want You to Read, and They Killed Our President.

David Talbot is the New York Times bestselling author of Brothers: The Hidden History of the Kennedy Years and The Devil’s Chessboard. He is the founder and former editor-in-chief of Salon and has written for the New Yorker, Rolling Stone, and Time. He lives in San Francisco.
Praise for Climate in Crisis (previously published under the title Horsemen of the Apocalypse)

”A must read for anyone concerned with climate and energy issues.”
—Leonardo DiCaprio

“When in the near future the climate implodes and misery envelops the planet, you will know the criminals against humanity who were most directly and personally responsible from [Horsemen of the Apocalypse].”
—Ross Gelbspan, author The Heat Is On and Boiling Point

“Dick Russell and Robert F. Kennedy, Jr. have brilliantly laid bare the horsemen of the apocalypse and their cronies who are now steering the American ship of state and are bent on committing hara-kiri on the agreements, agencies, and regulations that are a bulwark against their own country’s and the world’s plunge into disaster.”
—Homero Aridjis, Mexican poet, novelist, ambassador, and environmental activist; president emeritus of PEN International

"As the impacts of climate change grow increasingly visible in our daily lives, so must our understanding of the forces that are conspiring to stop actions to mitigate those impacts. This book lays bare how those forces, borne largely of self interest, are trying to make sure the US continues to add to global carbon pollution, the primary factor in climate change. With the new Trump administration trying to roll back president Obama's actions, this is a timely and essential read for everyone concerned. "
—Margo Oge, author of Driving the Future: Combating Climate Change with Cleaner, Smarter Cars

“This may be the most important book yet on the climate crisis . . . and by the way, it’s fun to read. Dick Russell’s keen research and sharp writing unpacks the complex sordid tale of fossil fuel corporations and their henchmen, from the Koch brothers to Exxon to Peabody coal, who have systematically held us back from solving climate change, using denial, deception, and ruthless power.”
—Kert Davies, director, Climate Investigations Center

“In Horsemen of the Apocalypse, Dick Russell lays out the lies and cover-ups of some of the men—including ExxonMobil’s Rex Tillerson and the Koch brothers—who have been hell-bent on amassing fortunes by exploiting fossil fuels, even while knowing that this exploitation would likely destroy civilization.”
—David Ray Griffin, author of Unprecedented: Can Civilization Survive the CO2 Crisis?

“Horsemen of the Apocalypse is a mind-opening exposé of the roots and branches of fossil fuel zealots, their campaigns of misinformation, and the rebellion of their descendants. It shows how the misuse of wealth and power can undermine democracy, threaten the health of the planet, and neglect our moral responsibility to future generations.”
—Sheldon Krimsky, PhD, Lenore Stern Professor of Humanities & Social Sciences, adjunct professor of public health and community medicine, Tufts University, and author of Stem Cell Dialogues: A Philosophical & Scientific Inquiry into Medical Frontiers