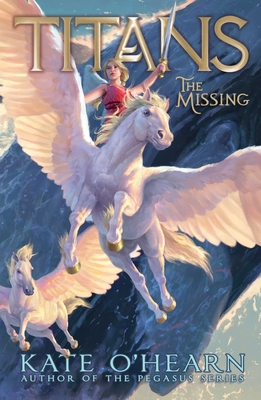 This is book number 2 in the Titans series.

Follow Astraea, Zephyr, and their friends as they travel to a dangerous jungle world in this second book in a brand-new series from bestselling Pegasus author Kate O’Hearn, who masterfully blends mystery and mythology together.

With the weakened Titan prisoners hidden on Earth, Astraea, Zephyr, and their team head to Nesso’s jungle world to seek help in the struggle against the Mimics.

But nothing goes to plan. The moment they arrive, they encounter a world filled with dangers they never imagined possible—from massive, hungry dinosaurs to a blisteringly hot sun. Soon Zephyr and Astraea are seriously wounded. Without ambrosia or nectar to heal them, the group soon realizes they are in serious trouble. But where can they go for help?

With Zephyr’s life slipping away, Jake and Tryn use their new flying skateboards to try to make it to Xanadu where they hope to find ambrosia for Zephyr and enlist help to join the fight against the Mimics.

Meanwhile, Astraea and the three centaurs must use all their cunning to keep Zephyr safe and alive. But danger comes in many forms, and it seems as though no one may be left to help them—until Jake and Tryn stumble across a lone Olympian everyone believed to be dead...
Kate O’Hearn was born in Canada, raised in New York City, and has traveled all over the United States. She currently resides in England. Kate is the author of the Pegasus series, the Shadow Dragon series, the Titans series, the Valkyrie series, and the Atlantis series. Visit her at KateOHearn.com.
What was supposed to be a quick trip for Astraea, Zephyr, Jake, Cylus, and the others—to a new planet to recruit allies in the fight against the Mimics—becomes a race against time to rescue the abducted Titan leaders, learn to trust and collaborate with each other, and find an effective way to fight the shape-shifting alien species known as the Mimics before they take over more worlds. Book two of the Titans series, the sequel to Titans (2019), is a thrill ride of episodic encounters, with a new danger or confounding wrinkle every couple of pages. The action includes snakes as allies, life-threatening injuries to favorite characters, time travel, planet hopping, and clashing personalities that threaten missions, yet somehow O’Hearn syncs it all together for a fast-paced, satisfying adventure. This is more of the same for her fans, especially of the Pegasus series, which shares characters with the Titans series. Give this also to young Percy Jackson fans, and try it with readers of Michael Carroll’s Super Human series.
— Booklist