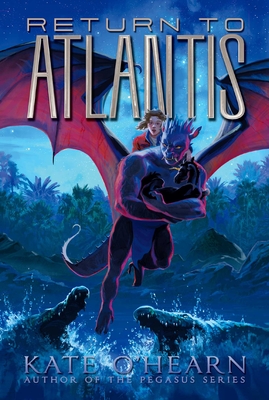 This is book number 2 in the Atlantis series.

From the author of the Pegasus series comes the second book in a spellbinding fantasy series for fans of Rick Riordan and Shannon Messenger, in which Riley’s return home is short-lived and full of unforeseen danger.

Riley thought that her adventure was over when they arrived back home in Colorado. Although she misses her dad, she’s back with her mom and brother and has caught up with her classes at school. Though Maggie, Pea, and her aunt have to hide in their basement apartment during the day, they are making the most of things and settling into their new life.

But things get much more complicated when a gang of thieves plagues Riley’s neighborhood and her family takes in a group of children who don’t know about the Atlanteans living in the basement. To make matters worse, the Atlanteans are becoming gravely ill, and everyone starts to worry that they may not be able to survive so far from the island’s magic.

As tensions escalate, their only option is to return to Atlantis—and face all the enemies they made during their escape, plus a few new ones.
Kate O’Hearn was born in Canada, raised in New York City, and has traveled all over the United States. She currently resides in England. Kate is the author of the Pegasus series, the Shadow Dragon series, the Titans series, the Valkyrie series, and the Atlantis series. Visit her at KateOHearn.com.