To the Rescue: Geeger the Robot (QUIX) (Paperback) 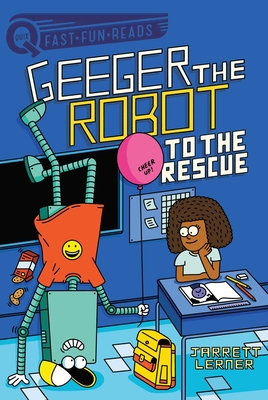 To the Rescue: Geeger the Robot (QUIX) (Paperback)


Not on our shelves. Usually ships in 2-5 days.
For fans of the Bots books comes the adventures of Geeger, a robot whose best friend needs his help in the third story in a fun-to-read Aladdin QUIX chapter book series that’s perfect for emerging readers!

Geeger’s best friend, Tillie, is having a bad day and he wants to cheer her up. But sharing snacks and jokes aren’t working. How will Geeger make Tillie smile again?
Jarrett Lerner is the award-winning creator of more than a dozen books for kids, including the EngiNerds series of middle grade novels, the Geeger the Robot series of early chapter books, the Hunger Heroes series of graphic novel chapter books, two activity books, the illustrated novel in verse A Work in Progress, and the Nat the Cat series of early readers. You can find him online at JarrettLerner.com and on Twitter and Instagram at @Jarrett_Lerner. He lives with his wife and daughters in Massachusetts.

Serge Seidlitz, an English/German hybrid born in Kenya, grew up traveling between the UK and Asia. A steady diet of MTV and Mad magazine fueled his desire to become an illustrator. He combines elements from popular culture with diverse influences to create work that forms an iconic and graphic language. Following his studies in graphic design at Camberwell College of Arts, Serge worked as an in-house designer at Cartoon Network before leaving to focus on illustration.