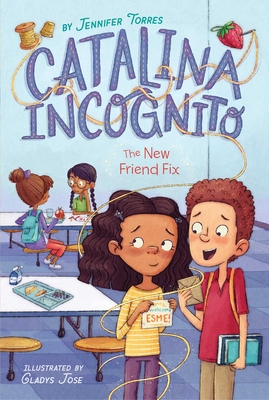 This is book number 2 in the Catalina Incognito series.

One Day at a Time meets Mindy Kim in this second book in a charming new chapter book series about Catalina Castaneda, a Mexican American girl with a magical sewing kit who tries to befriend the new girl at school.

Catalina is excited to find out a new student, Esmeralda, has joined her third-grade class at Valle Grande Elementary School. But despite Catalina’s attempts to introduce herself, Esme won’t talk to anyone but her own cousin, Jazmín. Could Jazmín be keeping Esme from making new friends?

According to Catalina’s frenemy Pablo, it’s just like what happened to the secret princess in the telenovela hit The Hidden Crown! With Tía Abuela’s magical sewing kit, Catalina sets out to create a disguise to unravel the mystery.
Jennifer Torres is the award-winning author of Stef Soto, Taco Queen; The Fresh New Face of Griselda; and other books for young readers. She writes stories about home, friendship, and unexpected courage inspired by her Mexican American heritage. Jennifer started her career as a newspaper reporter, and even though she writes fiction now, she hopes her stories still have some truth in them. She lives with her family in Southern California.

Gladys Jose is an illustrator and storyteller. She graduated from the University of Central Florida in 2012, where she earned a bachelor’s degree in fine arts, specializing in graphic design. Gladys is the illustrator of Library Fish, Fresh Princess, The Elephants’ Guide to Hide-and-Seek, and the Once Before Time chapter book series.