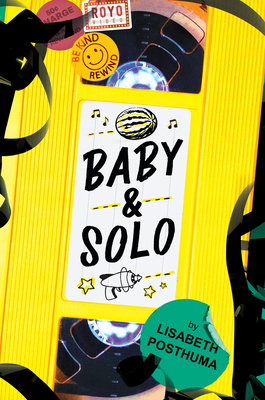 
On Our Shelves Now
Joel’s new job at the video store is just what the therapist ordered. But what happens if the first true friend he’s made in years finds out about What Was Wrong With Him?

Seventeen-year-old Joel Teague has a new prescription from his therapist—a part-time job—the first step toward the elusive Normal life he’s been so desperate to live ever since The Bad Thing happened. Lucky for Joel, ROYO Video is hiring. It’s the perfect fresh start—Joel even gets a new name. Dubbed “Solo” after his favorite Star Wars character, Joel works his way up the not-so-corporate ladder without anyone suspecting What Was Wrong With Him. That is, until he befriends Nicole “Baby” Palmer, a smart-mouthed coworker with a chip on her shoulder about . . . well, everything, and the two quickly develop the kind of friendship movie montages are made of. However, when Joel’s past inevitably catches up with him, he’s forced to choose between preserving his new blank slate persona and coming clean—and either way, he risks losing the first real friend he’s ever had. Set in a pop-culture-rich 1990s, this remarkable story tackles challenging and timely themes with huge doses of wit, power, and heart.
Lisabeth Posthuma is a devotee of obscure documentaries about drive-ins, a lover of rotary telephones, and a trophy-winning champion of TV trivia. She lives in Michigan with her two parakeets, Tiki Bon Jovi and Alaska Riggins.
In the mid-1990s, Joel Teague, at the behest of his psychiatrist, takes on a new job: video rental store clerk. ROYO Video, where all employees go by movie character names, is a fresh start...Tough issues, such as mental illness, divorce, homophobia, and emotionally abusive family members, are explored with nuance and empathy. There are moments of lightheartedness too, such as movie discussions and a Secret Santa exchange, which make the novel well-rounded and heartfelt... A strong addition to high school libraries, as it gracefully handles mental health and demonstrates a strong, platonic friendship
—School Library Journal

Through work, friendship, and honesty, 17-year-old Joel confronts his difficult past and begins healing. . .The author seamlessly weaves sound psychological advice into the story through Joel’s observations about how he reacts to the behavior of his parents and cast of misfit co-workers. This sensitive, complex, and layered novel provides insight into family trauma and mental health recovery while taking readers on a journey of discovery that ends with an unexpected revelation...An absorbing story of recovery from trauma.
—Kirkus Reviews

Outspoken, sarcastic Nicole makes an amusing foil to quiet, introspective Joel, and the duo’s vividly portrayed video store workplace lends an era-specific liveliness. Though the book takes place in 1996, the issues it addresses, including the lingering effects of trauma, remain relevant.
—Publishers Weekly

Posthuma immerses the reader in a time capsule of 1990s pop culture, managing to keenly capture not only the feeling of growing up in that era but also the motifs of iconic films like Empire Records and High Fidelity. Despite the fun and humorous tone, the book nonetheless tackles hard-hitting topics such as teen sex and pregnancy, mental illness, and suicide with directness and empathy. This is a great read for those curious about how teens related to each other before the rise of cell phones and social media.
—Booklist

Lisabeth Posthuma offers a blast from the past in this beautifully written, poignant novel set in 1996 at a video store, a mostly vanished community institution that will no doubt seem like an ancient relic to readers in the target audience. . . . With the finesse of a thriller, Posthuma carefully withholds the reveal about the Bad Thing, and Joel's epiphany about how he has been dealing with it, until almost the end of the novel. Against the colorful backdrop of the video store setting, the author offers a compelling portrait of two wounded souls connecting and a heart-rending tale of emotional abuse, tragedy, family trauma and healing.
—The Buffalo News