North Korea in a Nutshell: A Contemporary Overview (Hardcover) 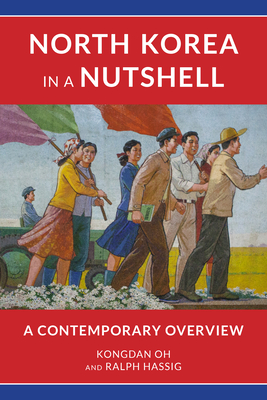 North Korea in a Nutshell: A Contemporary Overview (Hardcover)

Explore North Korea, one of the most secretive countries in the world. This thoughtful book provides a concise introduction to North Korea. Two leading experts, Kongdan Oh and Ralph Hassig, trace the country's history from its founding in 1948 and describe the many facets of its political, economic, social, and cultural life. The authors illuminate a hidden nation dominated by three generations of the secretive Kim regime, a family dynasty more suited to the Middle Ages than the contemporary era. North Korea has a robust if outmoded military force, including a growing arsenal of weapons of mass destruction, to deter and defend against foreign attacks and to maintain independence and isolation from the rest of the world. The struggling economy, disconnected from the global marketplace, operates under harsh international sanctions. All North Koreans, from the highest party cadres to the youngest children living in prison camps, are essentially servants of the leader. Despite Kim Jong-un's despotic control, the authors argue that North Korea cannot continue on its current path indefinitely. Kim treats even his closest associates harshly, and the gap is widening between his elite supporters, numbering a million or so, and the other twenty-four million North Koreans. The economic and technological gap between South Korea and North Korea is increasing as well, and younger people are becoming disenchanted as they gradually learn more about the outside world.
Kongdan (Katy) Oh, whose parents fled from the northern half of Korea in 1945, has worked for more than thirty years as a policy analyst at the RAND Corporation and then at the Institute for Defense Analyses. Ralph Hassig taught for five years in Asia as an adjunct professor of psychology at the University of Maryland University College.. He and his wife, Kongdan Oh, are the authors of North Korea through the Looking Glass and The Hidden People of North Korea.