Swahili in One Week (Paperback) 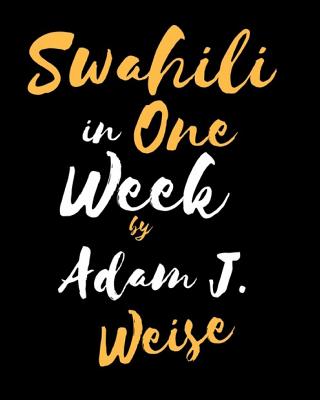 Swahili in One Week (Paperback)


Not on our shelves. Usually ships in 2-5 days.
(This book is nonreturnable. Nonreturnable books may take up to 3 weeks to ship. All sales final.)
Swahili in One Week is easily accessible to those who struggle to learn languages or doubt their ability to do so. This book sets you on the path to fluency by teaching you the fundamentals of Swahili, which you can use as a base for future learning. The book is divided into seven days worth of subjects and practice exercises and includes Swahili-English and English-Swahili dictionaries. Many language textbooks are full of unnecessary information and simply list words and phrases to be memorized in a misguided attempt to build fluency. How is this book different? You will: A. Learn only the most essential vocabulary or dig deeper into subjects like local food and customs; B. Make learning a language the fun it should be; C. Save time by using the included study plan; D. Ability to have brief exchanges after just one day; E. Communicate in the language in basically any daily situation after one week; and F. Impress Swahili speaking friends with your quick progress in the language. The goal of this book is to give the reader-having no prior knowledge of Swahili-the ability to manage basic exchanges and, more importantly, an understanding of the language upon which they can quickly build to become a proficient speaker. This is why literal translations are used, by knowing "habari yako" means "news your" instead of "how are you," which is the non-literal translation, the language learner adds two unique words plus the phrase to their vocabulary. Compare this to the traditional language learning method The ineffective traditional method guarantees you will: A. Waste your time learning the wrong words; B. Have difficulty retaining words because you do not use them in conversation; C. Struggle to conjugate verbs and build sentences; D. Fail to understand the cultural context in which to use vocabulary; and E. Become frustrated and want to quit All proceeds from this book will go to Tanzanian charities House of Blue Hope and AVC Tanzania.
Adam J. Weise learned Swahili while living in Dar Es Salaam, Tanzania and studying under Sayi Michael at the Swahili Dar Language School. Adam developed his unique language learning style while studying at the Foreign Service Institute in preparation to work as a Foreign Service Officer in French-speaking West Africa and the Spanish-speaking Caribbean. While living in Tanzania, Adam helped found the House of Blue Hope - a nonprofit for vulnerable children. Adam co-founded Ex Fabula, a Milwaukee-based nonprofit organization that builds community through storytelling. Learn more about Adam at AdamWeise.com