October Surprise: How the FBI Tried to Save Itself and Crashed an Election (Hardcover) 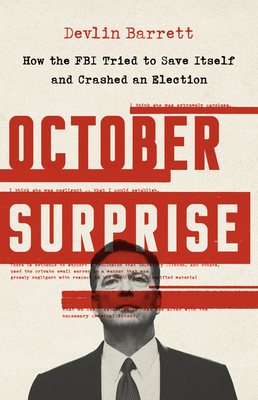 October Surprise: How the FBI Tried to Save Itself and Crashed an Election (Hardcover)


Special Order - Subject to availability
The 2016 Election, which altered American political history, was not decided by the Russians or in Ukraine or by Steve Bannon. The event that broke Hillary's blue wall in the Midwest and swung Florida and North Carolina was an October Surprise, and it was wholly a product of the leadership of the FBI. This is the inside story by the reporter closest to its center.
In September 2016, Hillary Clinton was the presumptive next president of the US. She had a blue wall of states leaning her way in the Midwest, and was ahead in North Carolina and Florida, with a better than even shot at taking normally Republican Arizona. The US was about to get its first woman president. Yet within two months everything was lost. An already tightening race saw one seismic correction: it came in October when the FBI launched an investigation into the Clinton staff's use of a private server for their emails. Clinton fell 3-4 percent in the polls instantly, and her campaign never had time to rebut the investigation or rebuild her momentum so close to election day. The FBI cost her the race.

October Surprise is a pulsating narrative of an agency seized with righteous certainty that waded into the most important political moment in the life of the nation, and has no idea how to back out with dignity. So it doggedly stands its ground, compounding its error. In a momentous display of self-preservation, James Comey, Andrew McCabe, and key Justice Department officials decide to protect their own reputations rather than save the democratic process. Once they make that determination, the race is lost for Clinton, who is helpless in front of their accusation even though she has not intended to commit, let alone actually committed, any crime.

A dark true-life thriller with historic consequences set at the most crucial moment in the electoral calendar, October Surprise is a warning, a morality tale and a political and personal tragedy.
Devlin Barrett is a reporter with the Washington Post, where he writes about the FBI and the Justice Department. He was part of a team that won a Pulitzer Prize in 2018 for National Reporting, for coverage of Russian interference in the US election. In 2017, hewas a co-finalist for both the Pulitzer for Feature Writing and the Pulitzer for International Reporting. He has covered federal law enforcement for more than 20 years, and has worked at the Wall Street Journal, the Associated Press, and the New York Post.
He lives in Virginia.

"In his important and engrossing book, Barrett has laid out a damning portrait of the FBI in the run-up to the election...[Barrett] delivers an exquisitely sourced indictment of Comey and the bureau he once led."
—Washington Post