Can't Take That Away (Hardcover) 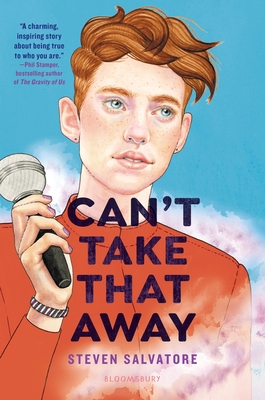 Can't Take That Away (Hardcover)

“Salvatore brings every character to life in Can’t Take That Away. The characters are flawed and beautiful, and Carey and his friends remind me so much of me and my friends during my high school days. I am so happy young people today have books like this to read, and have the ability to be heard and seen in a way we didn’t have when I was growing up. Can’t Take That Away is going to be an important book in young people’s literature.”
— Rayna Nielsen, Garden District Book Shop, New Orleans, LA

"A charming, inspired story about being true to who you are." - Phil Stamper, bestselling author of The Gravity of Us

An empowering and emotional debut about a genderqueer teen who finds the courage to stand up and speak out for equality when they are discriminated against by their high school administration.

Carey Parker dreams of being a diva, and bringing the house down with song. They can hit every note of all the top pop and Broadway hits. But despite their talent, emotional scars from an incident with a homophobic classmate and their grandmother's spiraling dementia make it harder and harder for Carey to find their voice.

Then Carey meets Cris, a singer/guitarist who makes Carey feel seen for the first time in their life. With the rush of a promising new romantic relationship, Carey finds the confidence to audition for the role of Elphaba, the Wicked Witch of the West, in the school musical, setting off a chain reaction of prejudice by Carey's tormentor and others in the school. It's up to Carey, Cris, and their friends to defend their rights--and they refuse to be silenced.

Told in alternating chapters with identifying pronouns, debut author Steven Salvatore's Can't Take That Away conducts a powerful, uplifting anthem, a swoony romance, and an affirmation of self-identity that will ignite the activist in all of us.

Steven Salvatore is a gay, genderqueer author, educator, Mariah Carey lamb, and Star Wars fanatic who spends most days daydreaming and making up stories. They have an MFA in Creative Writing from The New School. They were formerly a full-time Assistant Professor of Composition and Director of the Writing Center at The College of New Rochelle. After the college permanently closed in 2019, they took a step back from teaching full-time to focus on their writing, though they do still teach at a few colleges while running a writing workshop at The LOFT, an LGBT resource center in White Plains, New York. Steven currently lives in Peekskill, New York, with their amazingly patient husband, whose name is also Steve.
stevensalvatore.com
@StevenSSWrites

"Can't Take That Away is a charming, inspiring story about being true to who you are, regardless of what others see. A perfect balance of queer joy and resistance, this power ballad of a story will leave you changed . . . for good." - Phil Stamper, bestselling author of THE GRAVITY OF US

"Can’t Take That Away is an honest, joyful, sparkling story of love, friendship, and the unique pride that comes with being yourself in the face of adversity. Carey deserves a standing ovation!" - Jessica Verdi, author of FOLLOW YOUR ARROW and AND SHE WAS

"This charming, joyful story—about self-love, fighting for what’s right, and the love to be found in chosen family—will make you want to put on a pair of red heels and blast Mariah Carey." - Booklist, starred review

"A defiant love letter to queer youth; honest, brutal, and more important than ever." - Kirkus Reviews

"This page turner is a perfect pick for music lovers, budding activists, and kids questioning their own gender identities." - BCCB

"A fresh voice + a genderqueer teen + one Wicked musical + fighting against the establishment + first love = A page-turning YA debut. Recommended for all YA collections." - School Library Journal

"Filled with big emotions. . . as empowering as it is entertaining, Salvatore’s debut novel hits all the right notes." - BookPage