Gender Outlaws: The Next Generation (Paperback) 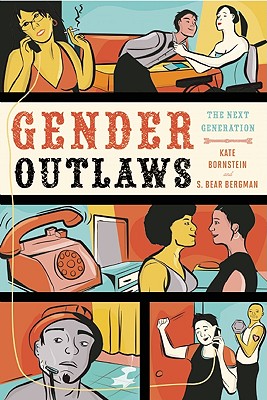 Gender Outlaws: The Next Generation (Paperback)


On Our Shelves Now. Click on title for location specific availability.
This groundbreaking and inspiring collection of dozens of our most original trans voices is a “smart, sexy, and entertaining” (Jack Halberstam) exploration of gender today.

Transgender narratives have made their way from the margins to the mainstream and back again, and today’s trans and nonbinary people, genderqueers, and other sex/gender radicals are writing a drastically new world into being. Edited by the original gender outlaw, Kate Bornstein, together with writer, raconteur, and theater artist S. Bear Bergman, Gender Outlaws collects and contextualizes the work of this generation's trans and genderqueer forward thinkers—new voices from the stage, on the streets, in the workplace, in the bedroom, and on the pages and websites of the world's most respected publications. Gender Outlaws includes essays, commentary, comic art, and conversations from a diverse group of trans-spectrum people who live and believe in barrier-breaking lives.
Kate Bornstein divides their time between New York City and the Rhode Island shore. Kate’s stage work includes the solo performance pieces The Opposite Sex Is Neither, Virtually Yours, and On Men, Women, and the Rest of Us, and Kate’s books include Gender Outlaw and A Queer and Pleasant Danger.

S. Bear Bergman is the author of nine books, founder of Flamingo Rampant press, and frequent consultant in equity and inclusion to business and government. Bear began his work in equity at the age of 15, as a founding member of the first ever Gay/Straight Alliance and has continued to help organizations and institutions move further along the pathways to justice ever since. These days Bear spends his time making trans cultural competency interventions however he can and trying to avoid stepping on his children’s Lego.

"Gender Outlaws takes the word gender and does to it what each new generation does with its inheritance: take what was handed down, sample and remix the hits of yesterday, and then reinvent and reimagine itself into a new being that only occasionally looks like its parents."—Ivan E. Coyote, writer and performer

"Bornstein, Bergman, and their rogue gallery of contributors explore the human genderscape with wit and soul. Gender Outlaws is required reading for anyone who has a sex or a gender... especially if you already think you know everything you need to know about them."—Hanne Blank, author of Big Big Love, Unruly Appetites, and Virgin: The Untouched History

"Finally, a book that gathers together the voices of new generations of gender outlaws! Edited by two trans-legends, this book manages to be smart, sexy, and entertaining. Gender Outlaws continues older conversations, starts new and often transnational dialogues, and gives us new ways of thinking about and inhabiting trans bodies, politics, and identities. Don't just read this book, become it!"—Jack Halberstam, author of The Queer Art of Failure