From Cradle to Stage: Stories from the Mothers Who Rocked and Raised Rock Stars (Hardcover) 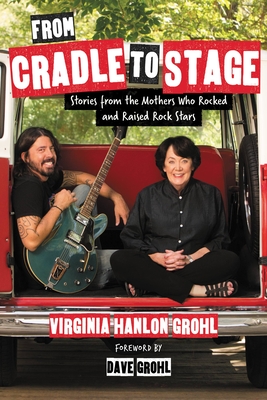 From Cradle to Stage: Stories from the Mothers Who Rocked and Raised Rock Stars (Hardcover)


On Our Shelves Now. Click on title for location specific availability.
Written by Virginia Grohl, the mother of Dave Grohl—former Nirvana drummer and current frontman for the Foo Fighters—From Cradle to Stage shares stories and exclusive photos featuring mothers of rock icons, the icons themselves, and their Behind the Music-style relationships

While the Grohl family had always been musical-the family sang together on long car trips, harmonizing to Motown and David Bowie-Virginia never expected her son to become a musician, let alone a rock star. But when she saw him perform in front of thousands of screaming fans for the first time, she knew that rock stardom was meant to be for her son. And as Virginia watched her son's star rise, she often wondered about the other mothers who raised sons and daughters who became rock stars. Were they as surprised as she was about their children's fame? Did they worry about their children's livelihood and wellbeing in an industry fraught with drugs and other dangers? Did they encourage their children's passions despite the odds against success, or attempt to dissuade them from their grandiose dreams? Do they remind their kids to pack a warm coat when they go on tour?

With exclusive family photographs and a foreword by Dave Grohl, From Cradle to Stage will appeal to mothers and rock fans everywhere.
Virginia Grohl is a longtime educator and writer. She is also the mother of Dave Grohl, frontman for the Foo Fighters and former drummer for Nirvana.
"In From Cradle to Stage, Grohl proves that the most interesting thing about rock moms is not their children - it's a culmination of the decisions they've made as mothers: the sacrifices, boundless support and trust that granted their children the freedom to pursue their dreams."—LA Weekly

"From Cradle to Stage finds Grohl interviewing the mothers of 18 music stars, shedding light on what it's like to raise a creative child who becomes a star, as well as sharing elements of their own stories."—New York Post