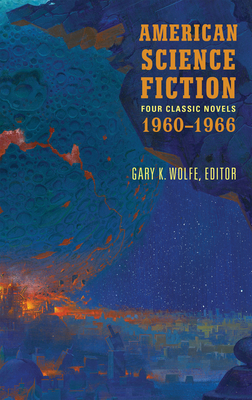 
On Our Shelves Now. Click on title for location specific availability.
In a deluxe collector’s edition, four classic science fiction novels from the genre’s most transformative decade—including the landmark Flowers for Algernon

This volume, the first of a two-volume set gathering the best American science fiction from the tumultuous 1960s, opens with Poul Anderson’s immensely popular The High Crusade, in which aliens planning to conquer Earth land in Lincolnshire during the Hundred Years’ War.

Daniel Keyes’s beloved Flowers for Algernon—winner of the Nebula Award and adapted as the Academy Award-winning movie Charly—is told through the journal entries of Charlie Gordon, a young man with severe learning disabilities who is the test subject for surgery to improve his intelligence.

And in the postapocalyptic earthscape of Roger Zelazny’s Hugo Award-winning . . . And Call Me Conrad (also published as This Immortal) Conrad Nomikos reluctantly accepts the responsibility of showing the planet to the governing extraterrestrials’ representative and protecting him from rebellious remnants of the human race. Using early manuscripts and original setting copy, this Library of America volume restores the novel to a version that most closely approximates Zelazny’s original text.
Gary K. Wolfe editor, is Emeritus Professor of Humanities at Roosevelt University and the author, most recently, of Evaporating Genres: Essays on Fantastic Literature and Sightings: Reviews 2002-2006. He has received numerous awards for his critical writing including the British Science Fiction Association Award, the Pilgrim Award from the Science Fiction Research Association, the Distinguished Scholarship Award from the International Association for the Fantastic in the Arts, and the World Fantasy Award. He writes regular review columns for Locus magazine and the Chicago Tribune, and co-hosts with Jonathan Strahan the Hugo-nominated Coode Street Podcast.

Born in Bristol, Pennsylvania, and raised mainly in Texas, Poul Anderson (1926-2001) published more than fifty SF novels over the course of his long career, winning multiple Hugo and Nebula Awards. A native of Milville, Wisconsin, Clifford D. Simak (1904-1988) was inducted as a Grand Master of the Science Fiction Writers of America in 1977. Born in New York City, Daniel Keyes (1927-2014) won a Nebula Award for Flowers for Algernon (1966) and became a creative writing professor at Ohio University. Born in Euclid, Ohio, Roger Zelazny (1937-1995) was hailed as a leading voice of SF's "New Wave," winning six Hugo and three Nebula Awards.