Radical: My Year with a Socialist Senator (Paperback) 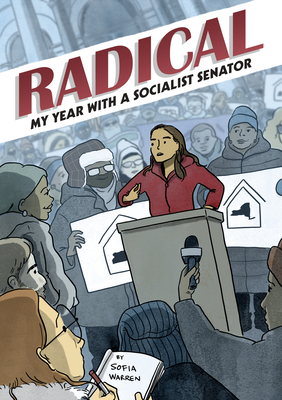 Radical: My Year with a Socialist Senator (Paperback)


On Our Shelves Now. Click on title for location specific availability.
You won the election... now what? Activist organizing meets government gridlock as a millennial New Yorker cartoonist follows a first-year senator on her unforgettable journey — from outsider to insider.

In early 2018, cartoonist Sofia Warren was not paying attention to New York state politics. But that summer, her Brooklyn neighborhood began buzzing about Julia Salazar, a 27-year-old democratic socialist running for state senate whose grassroots campaign was inspiring an army of volunteers. When they beat the odds and won, Warren found herself wondering what would happen next. How does it work when an outsider who runs on revolutionary change has to actually do the job? So she decided to find out.

Using the graphic memoir format, Radical: My Year with a Socialist Senator is a remarkable first-hand account of Warren’s experience embedded with Julia Salazar and her staff during their first year in office. From candid conversations and eyewitness experiences, Warren builds a gripping and intimate portrait of a scrappy team of community organizers battling entrenched power structures, particularly to advance Julia’s marquee issue of housing rights.

At every key point during the year — setting up an office, navigating insider politics, public pushback, testy staff meetings, emotional speeches, protest marches, setbacks, and victories — Warren is up close and personal with Julia and her team, observing, questioning, and drawing, as they try to translate their ideals into concrete legislation. Along the way, Warren works toward answers to deeper questions: what makes a good leader? What does it mean to be a part of a community? Can democracy work? How can everyday people make change happen?

All these themes are explored — with nuance, compassion, and humor — in Sofia Warren's remarkable debut.
Sofia Warren has been a contributing cartoonist to The New Yorker since 2017, and her work has been featured in MoMA Magazine, Narrative Magazine, Catapult, and the books Notes from the Bathroom Line and Send Help!. She is a visiting professor at Wesleyan University, and is based in Brooklyn.
"With confident character design and effective symbolic graphics... the result is part Schoolhouse Rock!, part participant-journalism, connecting a winding but hopeful thread between what Salazar’s team refers to as 'deep organizing' and substantive change. For comics readers raised on the March series who may be contemplating voting for their first time (or considering their own political futures), Warren offers grounded inspiration."
— Publishers Weekly

"Radical smoothly blends memoir, political reporting, and activist toolkit into an engaging read. Warren brings her strong New Yorker black-and-grey cartooning to bear, inviting the reader in... Younger readers—and many millennials—are likely to relate to the coming-of-age experience of learning while doing and may be heartened to learn that they aren’t alone in not knowing how everything in government works (or doesn’t)."
— Booklist