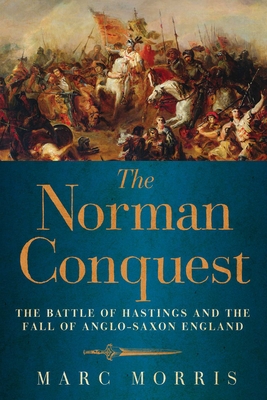 
On Our Shelves Now. Click on title for location specific availability.
An upstart French duke who sets out to conquer the most powerful and unified kingdom in Christendom. An invasion force on a scale not seen since the days of the Romans. One of the bloodiest and most decisive battles ever fought. This new history explains why the Norman Conquest was the most significant cultural and military episode in English history. Assessing the original evidence at every turn, Marc Morris goes beyond the familiar outline to explain why England was at once so powerful and yet so vulnerable to William the Conqueror’s attack. Morris writes with passion, verve, and scrupulous concern for historical accuracy. This is the definitive account for our times of an extraordinary story, indeed the pivotal moment in the shaping of the English nation.
Marc Morris is a historian specializing in the Middle Ages. He is the author of A Great and Terrible King; King John; and the Wall Street Journal and USA Today bestselling The Norman Conquest. Marc lives in England.

Stunning in its action and drama, this book illuminates fully what turns out to have been a tangled and violent passage in history.

It has been argued that the Norman conquest of England, initiated by William the Conqueror’s victory at the Battle of Hasting in 1066, was the single most important event in all of English history. Marc Morris’ meticulous and absorbing analysis of this seismic historical shift reaffirms that sweeping assertion. But where Morris’ book really excels is in its understanding of the conquest’s ramifications for the nation’s demographics, language, and ruling elite.

A lively subject, depicted with dash and color, brought to bright life with telling detail. Morris gives a compelling account of the invasion by William the Conqueror in 1066 and the violent struggle thereafter. Morris provides a much-needed, modern account of the Normans in England that respects past events more than present ideologies.

A historian who specializes in the Middle Ages, especially that period’s monarchies and aristocracy, Morris takes thoroughness to new heights as he compares all the available sources in this valuable text. A thoroughly enjoyable book from an historian’s historian who can write for the masses.