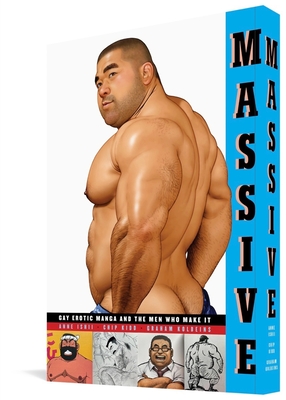 This is a groundbreaking manga (Japanese comics) anthology by and about gay men, put together by an award-winning team.

Anne Ishii is a writer and the Executive Director of Asian Arts Initiative in Center City Philadelphia.

Graham Kolbeins is a Canadian queer filmmaker, writer, and designer living in southern California. He co-founded Massive Goods with Anne Ishii in 2013.


Chip Kidd is best known for his iconic book jackets but is also a novelist, archivist, and influencer in the world of cartooning and pop culture. He lives in New York, NY.
Here's a book I want to give the highest recommendation to, but for very different reasons from those I would usually highlight for an amazingly effective collection of male-on-male erotic art — which this happens to be. But it is also fascinating and incredibly informative. The book's sections are not only beautiful, intelligent, sometimes humorous and always sexy as hell. They are also important, for what the artists have to say in the accompanying texts and essays about themselves and about the art they make. This is a wonderful collection that every reader and writer should read. It's a knockout on so many different levels!
— Samuel R. Delany - (author of Bread & Wine, Hogg, and Through the Valley of the Nest of Spiders)

Massive indeed accurately describes not only the multiple manifestations of homosexual desire, particularly in Japanese culture, but also a common aesthetic throughout all of these artists’ drawings…; hopefully this anthology will please ardent fans and raise the awareness that will stoke the new talent and audiences necessary to bara manga’s longevity.

Replete with rippling muscles and hypermasculinity, this volume provides a fascinating overview of contemporary gay manga and its creators. In a medium dominated by visual exaggeration, the figures given vivid, lusty life by these artists express the apex of a powerful butch sensibility. While the work... is as explicit as it could possibly get, there is a clearly expressed joy to its aggressive sexuality... U.S. collectors of this material will be thirsty for this first-ever English language anthology, and adventurous comics readers will encounter a realm they might have otherwise overlooked.
— Publishers Weekly

…[H]andsomely designed, meticulously researched… Massive... is far more than just a collection of pornographic stories ... [W]hat makes this such an invaluable anthology is right there in the title: the focus on 'the men who make it.' … So how’s the sex? It’s hot, strange, scary, awkward, intense, violent, and even hilarious at times. … Just like any other great pieces of art, these stories are outlets for unbridled creative expression, and that personal connection delivers some incredibly passionate pornography.

Smart and amazingly hot at the same time.
— Jacob Anderson-Minshall - The Advocate

…Massive is a groundbreaking work that immortalizes an often over-looked corner of the queer art world.

The title is not kidding around: it's a big anthology about big men with big appendages doing big, big things. … This is the kind of manga that's never been seen in the English-reading world before. …[It's] one of the best, not to mention one of the smuttiest, collections of manga ever published in the U.S.
— Shaenon Garrity - Anime News Network

Massive is not an introduction to one kind of gay Japanese manga. It is a showcase of the genre’s potential and what the best cartoonists do with it. This Fantagraphics collection has been a long time coming and is perfect for any American interested in in this community.

...[T]his lovingly compiled and impeccably designed introductory volume is absorbing, entertaining reading and made me an instant fan of several of the featured artists..., as well as offering fascinating background information into Japanese society itself. Also: hubba hubba!
— Rob Kirby - editor, QU33R

…Massive shows that gayness isn't alien. … Massive serves as a reminder that guys are objects, too, and that the way we see and the stories we tell figure male bodies as sexual, even in a mainstream culture that is reluctant to admit as much. To read Massive isn't to discover a hidden truth, but to see a massive, obvious fact — bulging out for all the world to see.