The Emotional Load: And Other Invisible Stuff (Paperback) 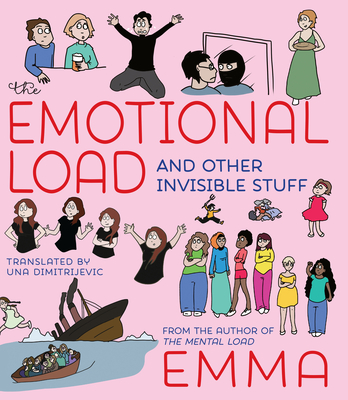 The Emotional Load: And Other Invisible Stuff (Paperback)

By Emma, Una Dimitrijevic (Translated by)


Not on our shelves. Usually ships in 2-5 days.
The author of The Mental Load returns with more "visual essays which are transformative agents of change."

After the success of The Mental Load, Emma continues in her new book to tangle with issues pertinent to women's experiences, from consent to the "power of love," from the care and attentiveness that women place on others' wellbeing and social cohesion, and how it constitutes another burden on women, to contraception, to the true nature of gallantry, from the culture of rape to diets, from safety in public spaces to retirement, along with social issues such as police violence, women's rights, and green capitalism. And, once more, she hits the mark.
Named one of the "Six Women of the Year" in 2018 by Parisian daily "20 minutes" and praised by The New York Times, Elle, The Guardian, The Huffington Post, Marie Claire, and many others, EMMA is the author of the acclaimed The Mental Load which has already been translated into six languages. As a former activist for "Stop harcèlement de rue" ("stop street harassment"), she now channels her feminist passion into "putting information out there" through her incisive cartons, several of which have gone viral around the globe. Her subjects range from politics, feminism, the workplace, the environment and a wide range of current social issues. Her goal is to get her readers to think by themselves. Emma currently lives in Paris and also works as a software engineer. emmaclit.com

UNA DIMITRIJEVIĆ was born in Bosnia, grew up in Scotland, and now lives in France. She translates from Serbo-Croat and French into English. Her translation of The Mental Load: A Feminist Comic was published by Seven Stories Press in 2018.
“Don’t be fooled by the simplicity of these drawings. With each stroke of the pencil, Emma tears at the patriarchy and tarnishes the veneer of a society whose injustices she denounces.” --Elle (France)