The Elementary Forms of the Religious Life (Hardcover) 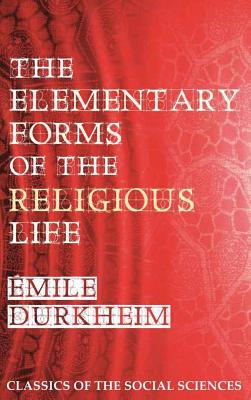 The Elementary Forms of the Religious Life (Hardcover)


Not on our shelves. Usually ships in 2-5 days.
(This book is nonreturnable. Nonreturnable books may take up to 3 weeks to ship. All sales final.)
The Elementary Forms of the Religious Life is the classic and unabridged work on the sociology of religion by one of the founders of the modern science of sociology-now presented in a library-quality hardcover edition. Look for the modern edition published by Quid Pro with a red cover; it avoids the proofreading and formatting errors of many "new edition."] mile Durkheim examines religion as a social phenomenon, across time and geographic boundaries. Some of the most elemental forms of social organization are analyzed, along with their religious beliefs and practices, to determine what is fundamental and shared by societies about religion and faith. - By examining some of the most basic forms of religion, particularly in aboriginal Australia and native America, and using a creative sociological and anthropological approach, Durkheim discovered the core of what separates religion from ritual, mysticism, science, and mere magic-what makes the soul more than a spirit. He lays bare the notion that the "primitive" rite, or any religion, is mainly about fear. - Part of the Classics of the Social Sciences Series from Quid Pro Books, and finally in a library-quality hardcover edition, this contemporary republication includes embedded page numbers from the standard print editions, for continuity of citations across print platforms and Quid Pro's eBook edition (also with the red cover). Standard pagination is a very useful feature for research, classwork, and group assignments. - This work is simply part of the canon of its field (both in cultural anthropology and in the sociology of religion), and is presented by Quid Pro in contemporary paperback and eBook formats. It includes 2012 Notes of the Series Editor, Steven Alan Childress, Ph.D., J.D., a senior professor of law at Tulane University.