Karachi Vice: Life and Death in a Divided City (Hardcover) 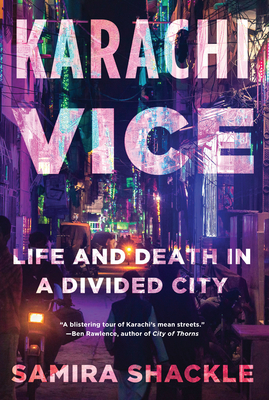 Karachi Vice: Life and Death in a Divided City (Hardcover)


On Our Shelves Now. Click on title for location specific availability.
A fast-paced, hair-raising journey around Karachi in the company of those who know the city inside out - from an electrifying new voice in narrative non-fiction.


Karachi. Pakistan’s largest city is a sprawling metropolis of twenty million people, twice the size of New York City. It is a place of political turbulence in which those who have power wield it with brutal and partisan force.  It takes an insider to know where is safe, who to trust, and what makes Karachi tick.

In this powerful debut, Samira Shackle explores the city of her mother’s birth in the company of a handful of Karachiites.  Among them is Safdar the ambulance driver, who knows the city’s streets and shortcuts intimately and will stop at nothing to help his fellow citizens. There is Parveen, the activist whose outspoken views on injustice repeatedly lead her towards danger. And there is Zille, the hardened journalist whose commitment to getting the best scoops puts him at increasing risk.

Their individual experiences unfold and converge, as Shackle tells the bigger story of Karachi over the past decade as it endures a terrifying crime wave: a period in which the Taliban arrive in Pakistan, adding to the daily perils for its residents and pushing their city into the international spotlight.

Writing with intimate local knowledge and a global perspective, Shackle paints a vivid portrait of one of the most complex and compelling cities in the world, a city where the borders blur between politicians and gangsters and between lawful and unlawful, as dangerous new forces of violent extremism are pitted against old networks of power.
Samira Shackle is the editor of New Humanist magazine and a regular contributor to the Guardian Long Read. She frequently reports from Pakistan, where she has family, and spent extensive time there working on the book. She has twice been a media fellow at Columbia University's Center for the Study of Social Difference, and in 2019 she was made a MacDowell fellow. This is her debut.
“A blistering tour of Karachi's mean streets.” Ben Rawlence, author, City of Thorns

"An evocative portrait ... Vivid prose and Shackle’s skillful balancing of the personal and the political make this a worthy introduction to a complex metropolis.” Publishers Weekly

"Moving tales of ordinary people navigating an unimaginable degree of violence and strife... In addition to the eye-opening personal stories, Shackle weaves in Pakistani history, including the rise of the Taliban and the dizzying array of political parties, riots, natural disasters, and sectarian violence that have plagued the city.” Kirkus Reviews

"Karachi Vice paints a vivid and compassionate picture of a
metropolis struggling with poverty, ethnic tensions, corruption, and the scars of colonialism." Booklist

“I was completely gripped by it.” —Kamila Shamsie, author of Home Fire

“A moving account of the struggles of everyday heroes—and of the
unhappy metropolis that needs them.” —The Economist


“Shackle excels at drawing out the incisive quote … the book’s triumph is Zille, the one character whose motives aren’t always transparent. Shackle can never quite pin him down – he lies to her three times about his age – and yet the city comes to life through his eyes.” The Guardian

‘Sobering and gripping… Karachi Vice meticulously constructs a vibrant mosaic of a city’s underbelly, while disentangling the ways in which Karachi is enmeshed with crime lords, gangs, political interests and militants.’ Times Literary Supplement

‘“[A] brilliant portrait of a complex place … in some senses, the book is like a novel: each character is so beautifully drawn that we are in their heads with ease, though that is often a hard place to be … This is like an X-rated film you want to walk out of but you don’t because alongside the brutality is the resilience, vitality and moral backbone of Shackle’s five subjects: despite being battered day after day, they hold on to their values, and their character, and in doing so, they give us hope.’ Mail on Sunday