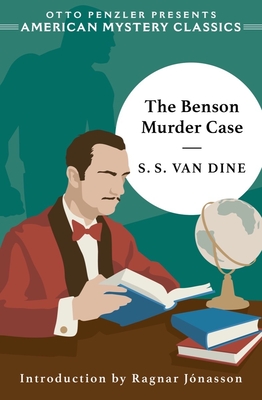 All of Wall Street and Manhattan high society is abuzz after playboy stockbroker Alvin Benson is discovered dead in his brownstone mansion, slumped over in an easy chair with a bullet in his head. The man’s body is found in a room locked from the inside, and his head is missing the toupee that usually adorned it. Ballistics experts, detectives, and the NYPD’s top brass can’t solve the crime, but luckily they don’t have to: New York’s leading flaneur and art connoisseur, Philo Vance, is on the case, and he’s got precisely the far-flung and esoteric knowledge needed to interpret the clues and determine whodunnit.

By carefully examining the crime scene and reconstructing the deadly shooting, Vance determines a number of things about the murderer, including his or her height—and this is only the first of many deductive feats that he will pull off before the investigation comes to a close. But will he be able to pierce the alibi of the true killer and prove their guilt beyond a reasonable doubt?

The first novel in one of the most influential detective series of the early twentieth century, The Benson Murder Case introduces iconic amateur sleuth Philo Vance with a plot loosely based on the true-life murder of a famous bridge player. Its aristocratic Golden Age New York setting, obscure art cultural references, and devilishly complicated puzzle plot make this a must-read for nostalgia buffs and for anyone who appreciates a classic mystery.

S. S. Van Dine is the pseudonym used by American art critic Willard Huntington Wright (October 15, 1888 – April 11, 1939) when he wrote detective novels. Wright was an important figure in avant-garde cultural circles in pre-World War I New York, and under the pseudonym (which he originally used to conceal his identity) he created the immensely popular Philo Vance character, one of the most influential detectives in American mystery fiction and, in turn, in film and radio as well.
The perfect sleuth for the Jazz Age
— CrimeReads

Mr. Van Dine’s amateur detective is the most gentlemanly, and probably the most scholarly snooper in literature.
— Chicago Daily Tribune

The Philo Vance novels were well-crafted puzzlers that captivated readers . . . the works of S.S. Van Dine serve to transport the reader back to a long-gone era of society and style of writing.
— Mystery Scene

With his highbrow manner and his parade of encyclopedic learning, Philo Vance is not only a detective; he is a god out of the machine.
— New York Times