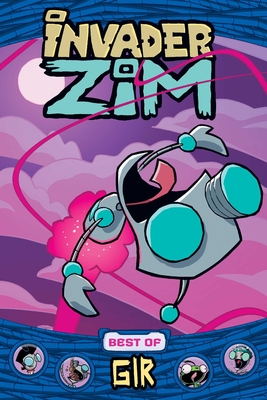 This is book number 1 in the Invader ZIM series.

The perfect gift for any Invader ZIM fan, this volume collects 4 of the best GIR stories from the original comic book series!

ZIM's defective SIR unit has long been a thorn in his side, creating more problems than he fixes. Wait, does he fix any problems at all? So... he just creates problems. What makes this little robot alien in a green dog costume tick? (Aside from, you know, the actual mechanism inside that makes him tick.)

In these four GIR-focused stories, he's everything from infuriating to loveable. Well, not loveable to ZIM. Humans do seem to like GIR for some reason, though. Can the reason be found in the pages of this book? Eh, that's a long shot. Can the secret recipe for Flamin' Hot Cheezos be found in the pages of this book? Much more likely. Contains issues 6, 22, 33, and 38 of the Oni Press series Invader ZIM.
Sam Logan is best known as the creator of Sam and Fuzzy, a massive comedy adventure series that he has been writing and illustrating for over 15 years. He's also either partly or completely responsible for President Dog, Skull Panda, the Underground RPG, and a lot of unrelated problems. He lives in Vancouver, BC with his two dogs. (They're very good boys.)

Warren Wucinich is an illustrator, colorist, and part-time carny currently living in Dallas, TX. When not making comics he can usually be found watching old Twilight Zone episodes and eating large amounts of pie.