Darjeeling: The Colorful History and Precarious Fate of the World's Greatest Tea (Paperback) 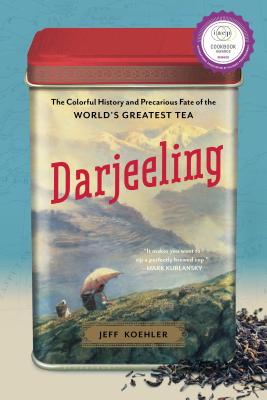 Darjeeling: The Colorful History and Precarious Fate of the World's Greatest Tea (Paperback)

Darjeeling's tea bushes run across a mythical Indian landscape steeped in the religious, the sacred, and the picturesque. Planted among eighty-seven tea estates at high elevation in the heart of the eastern Himalayas, the linear rows of brilliant green waist-high shrubs that coat the steep slopes and valleys produce less than 1 percent of India's tea. Yet with its bright color and muscatel flavor, Darjeeling is generally considered the finest tea in the world.

Built from scratch, India's tea industry grew to be the largest on the globe and came to symbolize British imperial rule in India. The jewel of its production was, and remains, Darjeeling, and its story is rich in people, intrigue, and terroir. It includes Robert Fortune, whose mid-nineteenth-century smuggling of tea plants and expertise from China brought the British East India Company the quality tea it sought; the charismatic and controversial Rajah Banerjee, whose family owned the iconic Makaibari plantation for 150 years; the tea pluckers who underpin the industry; and the lone auctioneer who bangs down his hammer oversees the sale more than half of Darjeeling's entire crop. But it is also the story of how this Edenic spot in the Himalayan foothills is beset by labor and political unrest and alarming climate change that threaten its future.

With passion and perception, Koehler illuminates a historic and arcane world, such that an ordinary tea bag and the cup enjoyed by tens of millions each day take on entirely new meanings.

Jeff Koehler is a writer, traveler, and cook, and the author of books and articles on food and culture, including Spain: Recipes and Traditions, named one of 2013's top cookbooks by the New York Times; Morocco: A Culinary Journey with Recipes; and La Paella: Deliciously Authentic Rice Dishes from Spain's Mediterranean Coast. His work has appeared in Saveur, Food & Wine, NPR.org, NationalGeographic.com, the Washington Post, Los Angeles Times, Afar, Tin House, and Best Food Writing 2010. He lives in Barcelona.

"There is no leaf unturned in Barcelona-based food journalist Koehler's exposition on the growing of Darjeeling tea." —Kirkus Reviews

"The author’s friendly writing style and obvious passion for the subject makes the book an entertaining read." —Library Journal

"When he writes about the tea itself . . . how the pickers skillfully pluck the leaves and toss them into a basket, how the tea smells as it's being dried, the daily taste tests at each estate--his prose is both sensory and balletic." —Chicago Tribune

"It is not just about Darjeeling, though; and not even just about tea. It is also about the history of colonial and post-colonial India . . . As for the rest, it is a book teeming with characters and interest. Koehler, described as ‘writer, photographer, traveller and cook,’ has the polymath’s curiosity for everything, as well as the writer’s ability to listen to and retell a good story . . . A richly digressive book." —Guardian