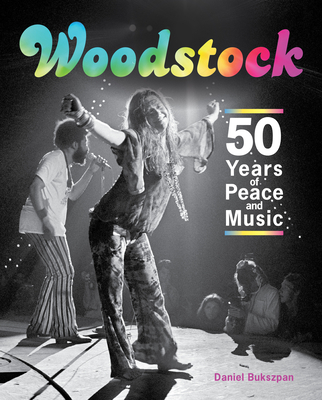 
On Our Shelves Now. Click on title for location specific availability.
Giftable 50th anniversary commemorative with never-before-seen images and original interviews. Hear from performers and attendees in their own voices! Featuring Janis Joplin, Jimi Hendrix, and The Grateful Dead, as well as unsung audience members and folks behind the scenes. This compendium remembers all the people who made the three days of peace and music an impossible success.

The world today feels far removed from the one in which Woodstock was possible, where half a million strangers congregated peacefully for three days.

With images by renowned photographers, including Amalie R. Rothschild and Elliott Landy, including the cover photo of Janis Joplin.
Daniel Bukszpan is freelance writer and the author of The Encyclopedia of Heavy Metal and The Encyclopedia of New Wave. He lives in Brooklyn, NY.
• Watch author Daniel Buiszpan on CBS New York at https://youtu.be/mN8r3fXINO0

• Listen to an interview with author Daniel Bukszpan on Dead Air Radio. http://bit.ly/31sUbzZ

• For the many of us who weren't fortunate enough to have been there (because we weren't born), and even for those that were, the original Woodstock Festival has become one of the most storied events in rock and popular music history. Thanks to the movie and countless campfire legends, there's so much that we know about the festival, so many nuggets that have become rock & roll folklore.

The free love at the the free festival in the free-flowing mud. The brown acid. Hendrix's dramatic closing set. Janis, The Who, The Dead, Joe Cocker and more, all putting in career-defining performances. There are legitimate reasons we still talk about Woodstock.

All of those things are covered in Daniel Bukszpan's new book and, incidentally, the mere fact that books are still being written about Woodstock speaks volumes. But the real fun lies not in the frequently retold legends, but rather the nuggets that are less frequently discussed. The bands that played sets not considered legendary.

That means the people who played early on day one, such as Richie Havens, Indian yogi Swami Satchidananda, Sweetwater, Bert Sommer and Jim Hardin. We read about the nightmare that was the bathroom situation (barefoot and carefree sounds great until you have to wallow through two feet of piss-mud), and the logistical issues of getting everyone fed. We can ponder the simple fact that the Paul Butterfield Blues Band had to follow Crosby, Stills, Nash & Young. And we can laugh at the fact that organizer John Morris sent a coded “Fuck you” message to Iron Butterfly when they demanded a helicopter from LaGuardia.

We knew so much about Woodstock but, after reading Bukszpan's book, we know so much more.
—LA Weekly, Book of the Month

• Read about the Woodstock phenomenon that has captured our collective psyche in the Washington Post at https://wapo.st/2SFUQtU