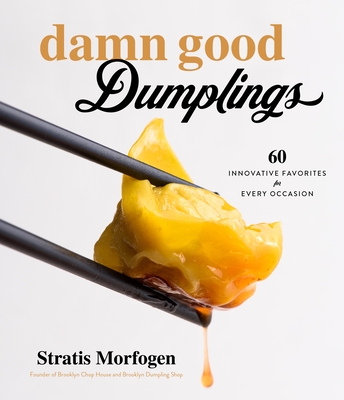 In 60 delectable recipes, third-generation restaurateur Stratis Morfogen showcases the star item of his restaurant, Brooklyn Chop House, which draws everyone from celebrities to devoted foodies: the dumpling.

Damn Good Dumplings fuses the palate of Stratis’s traditional Greek upbringing with his penchant for innovation. Using the dumpling as a foundation, he updates staples like club sandwiches and cheesesteaks into wholly different (and mouthwatering!) versions of themselves—enjoy the traditional dumpling fillings you already love, and discover exciting new ones that will soon become favorites. Given how easy and fun they are to make, these recipes are great for beginners and dumpling connoisseurs alike.

Try out comfort-food classics, like the Fried Chicken Dumplings, the Short Rib Stacked Dumplings or the Diner-Style Cream of Mushroom Soup Dumplings. Craving something sweet instead? Recipes such as the Sweet Potato Pie Dumplings and the Fried Banana Dumplings will tend to that. Seafood lovers will relish offerings like the Lobster Crunch Dumplings and the Crab & Spinach Dumplings while those with vegetarian inclinations are treated to delicacies like the Edamame Truffle Dumplings and the Vegan Lovers Dumplings. Cutting out gluten? Make the Gluten-Free Wonton Dough from scratch, and go from there! With so many enticing options to choose from in this collection, mealtime will always be brimming with thrilling possibilities.

Stratis Morfogen is the owner of Brooklyn Chop House, which is frequented by celebrities like Oprah, Barack Obama and Mary J. Blige. He lives in New York City.

“If you are craving dumplings, they should be from this book. Get your chopsticks and dive in!”
—Daniel Boulud, chef and restaurateur

“Stratis shares the secrets that have made him a legend. From the dough to the unique fillings, this book is the final word on dumplings.”
—Rocco DiSpirito, celebrity chef

“These dumplings are incomparable. They are to die (or to live) for.”
—Omari Hardwick, actor

“We love Damn Good Dumplings and highly recommend it for every home cook.”
—@Dumplinggang

“My last meal on earth will be the bacon cheeseburger dumplings at Brooklyn Chop House!”
—Gayle King, O Magazine

“This is the most innovative idea I’ve ever seen . . . bacon, cheeseburger and pastrami dumplings!”
—Rachael Ray

“These exciting new dumplings will break the internet!”
—Delish

“Dumplings should not be this good in a steakhouse, but they are!”
—Newsweek