How Not to Ask a Boy to Prom (Hardcover) 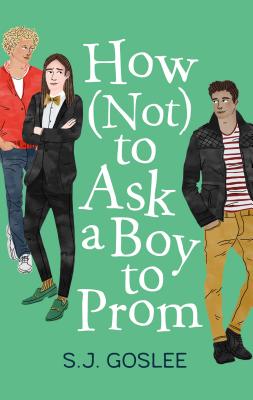 How Not to Ask a Boy to Prom (Hardcover)

“If you're looking for a novel to fill the To All The Boys I've Loved Before-shaped hole in your heart, this is the book for you.” —Camille Perri, author of When Katie Met Cassidy

How (Not) to Ask a Boy to Prom is a modern gender-bent young adult rom com from S. J. Goslee.

He's never had a boyfriend, or even been kissed. It's not like Penn Valley is exactly brimming with prospects. Nolan plans to ride out the rest of his junior year drawing narwhals, working at the greenhouse, and avoiding anything that involves an ounce of school spirit.

Unfortunately for him, his adoptive big sister has other ideas. Ideas that involve too-tight pants, a baggie full of purple glitter, and worst of all: a Junior-Senior prom ticket.

S.J. Goslee graduated from West Chester University with a BA in Literature and a minor in creative writing. She's been writing fanfiction in multiple fandoms for over a decade, amounting to over 140 stories and a million words. Whatever.is her debut novel. She lives in Glenolden, PA with her husband, two young sons, three cats and two dogs (one giant, one tiny).

“A tour de force novel with pages that almost seem to turn of their own accord.” —Kirkus Reviews, starred review

“A smash hit for teen romcom fans wanting a queer read-alike to Jenny Han’s To All the Boys I’ve Loved Before.” —School Library Journal

“Illuminating and humorous. Goslee has produced a delightful comedy of errors populated by complex characters that exhibit emotional depth while navigating the angst and drama of a queer YA romance.” —Booklist

“Full of humor and tenderness, this contemporary YA will satisfy readers looking to swoon.” —Buzzfeed

“An uproarious whirlwind of fake-dating events . . . likely to entertain teen readers who enjoy fast-paced humor . . . Another hit to add to [Goslee's] first novel, Whatever.” —VOYA

“The modern voice and humor S.J. Goslee brings to the story keeps this tale-as-old-as-time fresh and new . . . If you're looking for a novel to fill the To All The Boys I've Loved Before-shaped hole in your heart, this is the book for you.” —Camille Perri, author of When Katie Met Cassidy

“The queer rom-com is on the rise, [and] this embodies everything that makes a good romance . . . This book is great for those who liked To All the Boys I Loved Before by Jenny Han and The Field Guide to the North American Teenager by Ben Philippe.” —Isaiah West, YALSA Best Fiction for Young Adults nomination

Praise for Whatever. by S. J. Goslee: