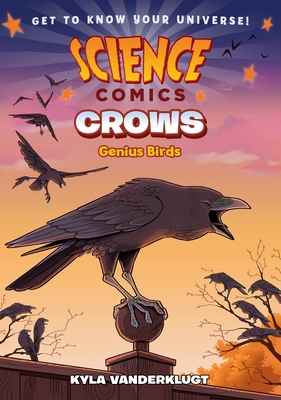 That's something to crow about! Learn all about these genius birds in Kyla Vanderklugt's Science Comics: Crows, the latest volume in First Second’s action-packed nonfiction graphic novel series for middle-grade readers!

Every volume of Science Comics offers a complete introduction to a particular topic—dinosaurs, the solar system, volcanoes, bats, robots, and more. These gorgeously illustrated graphic novels offer wildly entertaining views of their subjects. Whether you're a fourth grader doing a natural science unit at school or a thirty-year-old with a secret passion for airplanes, these books are for you!

Did you know that crows make their own tools, lead complex social lives, and never forget a human face? Scientists are just beginning to unlock the secrets of the crow's brain to discover how these avian Einsteins can be as smart as some primates, and even perform some of the same cognitive feats as human children! Crows have problem-solving skills that will make you you rethink what it means to be a bird brain!

Kyla Vanderklugt was born and raised in Toronto, Canada, where she graduated from OCAD University in 2008 with a Bachelor of Design. She currently freelances out of her studio in rural Ontario. Her comics work includes contributions to the Flight and Nobrow anthologies, Spera, Jim Henson's Storyteller and Labyrinth properties, and various self-published shorts.

Praise for the Science Comics series:

"This series—written by a handful of authors—seems determined to offer a useful introduction to anything a curious grade-school student might wonder about. The insight behind these books is a powerful one. So much information about the world around us is actually better conveyed visually, through charts, illustrations, and sequential panels, than purely using words." —New York Times

"Like having a Time Life Science Library in comic books. Which is awesome!" —Popular Science