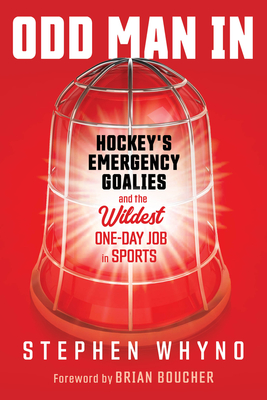 
Coming Soon - Preorder Now
An entertaining look at one of hockey's most unique traditions: the emergency backup goaltender.

Tom Fenton was in a barber’s chair when he got the call. Nathan Schoenfeld was giving his 5-week-old twin boys a bath. Eric Semborski was teaching kids to play hockey at a suburban rink.

Within hours, each was wearing a mask, pads, and an NHL uniform as an emergency goalie, perhaps the most unusual position in all of sports.

Odd Man In shares the stories of these unlikely masked heroes, tracing the origins of this quirk of the game while profiling those who have experienced the chaotic thrill of suiting up on short notice for an NHL team.

David Ayres, a Zamboni driver, became an overnight sensation with the Carolina Hurricanes after beating his hometown Toronto Maple Leafs. Accountant Scott Foster signed on the dotted line then played an unforgettable 14 minutes for the Chicago Blackhawks, finishing his one-day career with a perfect 1.000 save percentage.

Their stories and more are celebrated in this fascinating volume for all hockey fans.
Stephen Whyno is a national hockey writer for the Associated Press who has covered the NHL since 2010 with stops at the Washington Times and Canadian Press. He has worked seven Stanley Cup Final series and three Winter Olympics. Brian Boucher played 13 seasons in the NHL as a goaltender. He is a studio analyst for ESPN and ABC hockey broadcasts.