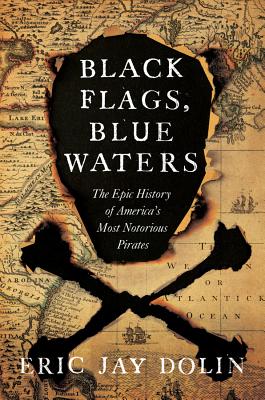 Set against the backdrop of the Age of Exploration, Black Flags, Blue Waters reveals the dramatic and surprising history of American piracy’s “Golden Age”—spanning the late 1600s through the early 1700s—when lawless pirates plied the coastal waters of North America and beyond. Best-selling author Eric Jay Dolin illustrates how American colonists at first supported these outrageous pirates in an early display of solidarity against the Crown, and then violently opposed them. Through engrossing episodes of roguish glamour and extreme brutality, Dolin depicts the star pirates of this period, among them towering Blackbeard, ill-fated Captain Kidd, and sadistic Edward Low, who delighted in torturing his prey. Also brilliantly detailed are the pirates’ manifold enemies, including colonial governor John Winthrop, evangelist Cotton Mather, and young Benjamin Franklin. Upending popular misconceptions and cartoonish stereotypes, Dolin provides this wholly original account of the seafaring outlaws whose raids reflect the precarious nature of American colonial life.

Eric Jay Dolin is the author of fourteen books. His most recent is A Furious Sky: The Five-Hundred-Year History of America's Hurricanes, which received a number of accolades, including being chosen by the Washington Post as one of 50 Notable Works of Nonfiction in 2020, by Kirkus Reviews as one of the Best Nonfiction Books of 2020 (in addition to being a Kirkus Prize finalist), by the Library Journal and Booklist as one of the Best Science & Technology Books of 2020, and by the New York Times Book Review as an "Editor's Choice." Other books include Leviathan: The History of Whaling in America, which was chosen as one of the Best Nonfiction Books of 2007 by the Los Angeles Times and the Boston Globe, and also won the 2007 John Lyman Award for U.S. Maritime History; and Black Flags, Blue Waters: The Epic History of America's Most Notorious Pirates, which was chosen as a "Must-Read" book for 2019 by the Massachusetts Center for the Book, and was a finalist for the 2019 Julia Ward Howe Award given by the Boston Author's Club. A graduate of Brown, Yale, and MIT, where he received his Ph.D. in environmental policy, Dolin lives in Marblehead, Massachusetts, with his family.
An entertaining romp across the oceans that shows how piracy is an inseparable element of our past… Mr. Dolin has a keen eye for detail and the telling episode. Readers will learn fascinating tidbits of language, habits and cultural assimilation.
— Rinker Buck, Wall Street Journal

Gripping… Dolin, who has previously written popular narratives about whaling, the fur trade and opium trafficking, finds another can’t-miss subject in the adventures of Kidd, Bonnet, Blackbeard and their ilk. Dolin makes it fresh by focusing on the interaction between pirates and the British colonies. His evidence is irrefutable: pirate cash and stolen goods were invaluable to colonial ports.
— Anne Bartlett, BookPage

A masterly and vivid account of the pirates who operated around America's coasts in the late 1600s and early 1700s. Using an impressive array of sources, Eric Jay Dolin throws a fresh light on familiar stories, unearths some new and surprising facts, and skillfully sets the exploits of a notorious generation of pirates in their historical context.
— David Cordingly, author of Under the Black Flag

Black Flags, Blue Waters is rumbustious enough for the adventure-hungry, but it also hews to the facts as they are known about the pirate lives and activities... Dolin’s book is not only a fine entertainment, but it draws the pirate in a clear light.

A compelling examination of the economics, geopolitics and strong—sometimes mad—personalities that fueled the great age of New World piracy. It not only illuminates a fascinating era of maritime history but also the dark actions of desperate men.
— Dean King, author of Skeletons on the Zahara

As he did with whales and lighthouses, Eric Jay Dolin gives us another sea-meets-shore epic wrapped in a swashbuckling narrative. Like a pirate’s treasure chest, this book is chock full of gold pieces that had me asking: “Why didn’t I know this?” Why didn’t I know that early American colonists often embraced pirates to irritate the British Crown? That pirates’ plunder was integral to the colonial economy? That the notorious Blackbeard once blockaded Charleston Harbor, took prisoners, and demanded medicine for his sick men? A fascinating adventure story filled with rogues, rascals, and ruthless renegades, this is stirring history that reads like a novel.

Dolin has produced an elegantly written history.... Black Flags, Blue Waters is distinctive and an excellent addition to this subdivision of maritime history.

In Black Flags, Blue Waters, Eric Jay Dolin presents the surprising and enthralling Age of Pirates that was more bloody than golden. In the process, he proves again that skillfully presented narrative nonfiction is even more gripping than swashbuckling mythology. If you've never read Dolin before, prepare to have a new favorite historian.

— Jeff Guinn, author of The Road to Jonestown

Dolin doesn’t just write a first-rate history of the Golden Age of Piracy, he puts us on deck with the men themselves, bringing us into the action and leaving no doubt as to why these great rogues matter to this day.
— Robert Kurson, author of Rocket Men

Black Flags, Blue Waters is a well-written and entertaining look at a relatively brief but significant period in American maritime history.

Bravo! Eric Jay Dolin—deftly blending scholarship and drama—has captured the flotilla of rogues who tormented merchants and crews along the American coasts. He powerfully re-creates the pirate life—from outlaw ports to stolen ships, from sunken gold to mass hangings. However, truth to tell, we do differ on Captain Kidd but that’s what keeps the world of pirate scholarship so lively.
— Richard Zacks, author of Pirate Hunter

A vivid and surprising book. Black Flags, Blue Waters weaves old names and fresh themes in unanticipated ways, giving us a deep history of American piracy that reads like a blood-drenched thriller.

Black Flags, Blue Water is a terrific—and at times terrifying—read. Tearing back the fiction of Hollywood movies, Eric Jay Dolin presents a frighteningly accurate and riveting portrayal of America's pirates and the surprising ways their ruthless trade affected the colonies and helped shape the American experience.

— Gregory N. Flemming, author of At the Point of a Cutlass

Once again Eric Jay Dolin has taken a massive subject and focused it into a single volume that is both well-researched and highly readable. This true story of the pirates who infested the shores of America during piracy’s “Golden Age” is a fascinating look at who and what these criminals and their accomplices ashore truly were. It is the perfect antidote for the Johnny Depp-ism that has infected this part of our nation’s history.
— James L. Nelson, author of Benedict Arnold’s Navy