The Oresteia: Agamemnon, Women at the Graveside, Orestes in Athens (Hardcover) 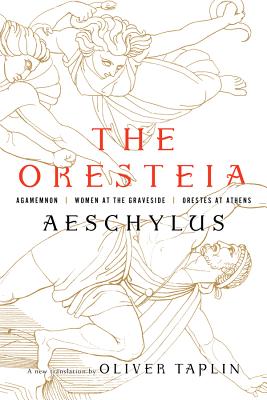 The Oresteia: Agamemnon, Women at the Graveside, Orestes in Athens (Hardcover)

By Aeschylus, Oliver Taplin (Translated by)

This spellbinding, groundbreaking translation reenergizes Aeschylus’ enduring saga of split loyalties, bloody sacrifice, and the efforts to bring peace after generations of strife.

The most renowned of Aeschylus’ tragedies and one of the foundational texts of Western literature, the Oresteia trilogy is about cycles of deception and brutality within the ruling family of Argos. In Agamemnon, afflicted queen Clytemnestra awaits her husband’s return from war to commit a terrible act of retribution for the murder of her daughter. The next two plays, radically retitled here as The Women at the Graveside and Orestes in Athens, deal with the aftermath of the regicide, Orestes’ search to avenge his father’s death, and the ceaseless torment of the young prince. A powerful discourse on the formation of democracy after a period of violent chaos, The Oresteia has long illuminated the tensions between loyalty to one’s family and to the greater community. Now, Oliver Taplin’s “vivid and accessible translation” (Victoria Mohl) captures the lyricism of the original, in what is sure to be a classic for generations to come.

Oliver Taplin is emeritus professor of classics at the University of Oxford. His books range from The Stagecraft of Aeschylus to Pots & Plays. He has recently published translations of Euripides’ Medea and Sophocles’ Oedipus the King and Other Tragedies.
Taplin provides an insightful, elegant rendition of the play. . . The Muse sings through his translation. . . . [Taplin] has created an English version full of sonic and metaphorical wealth. . . . Taplin’s is probably the best contemporary English rendition of the Oresteia in its evocation of Aeschylus’ poetic range, dramatic power and moving awareness of pain, grief, confusion and rage. His rhythmical, alliterative, sometimes rhyming but often very direct language conveys real emotional power.