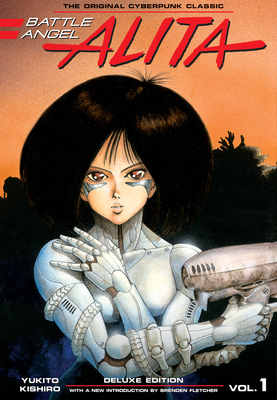 This is book number 1 in the Battle Angel Alita Deluxe series.

After more than a decade out of print, the original cyberpunk action classic returns in glorious 400-page hardcover deluxe editions, featuring an all-new translation, color pages, and new cover designs!


In a dump in the lawless settlement of Scrapyard, far beneath the mysterious space city of Zalem, disgraced cyber-doctor Daisuke Ido makes a strange find: the detached head of a cyborg woman who has lost all her memories. He names her Alita and equips her with a powerful new body, the Berserker. While Alita remembers no details of her former life, a moment of desperation reawakens in her nerves the legendary school of martial arts known as Panzer Kunst. In a place where there is no justice but what people make for themselves, Alita decides to become a hunter-killer, tracking down and taking out those who prey on the weak. But can she hold onto her humanity as she begins to revel in her own bloodlust?
"A great, kickass story." - James Cameron

"A story to savor, this is science fiction at its best." - Otaku USA Magazine

"With this oversize reissue, it's easy to really marvel at [Kishiro's] artwork... Battle Angel Alita is certainly one of the greatest (and possibly the greatest) of all sci-fi action manga series." - Anime News Network

"The moment my local comic store stuck a Battle Angel Alita poster in their window with a 'Now In Stock' notice, I grabbed up my copy of the first volume and it changed my life forever." - Brenden Fletcher (Batgirl, from the foreword)