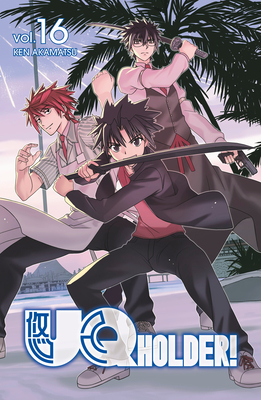 This is book number 16 in the UQ HOLDER! series.

A RACE AGAINST TIME

Just as Tota and Kirie are about to make their way back from Kyoto, the Senkyokan is attacked by none other than Tota's younger sister, Cutlass! While Jinbei and Makabe manage to keep her attacks at bay, Cutlass soon reveals that the orbital elevator is the target of an impending nuclear missile attack--which claims the lives of over ten thousand civilians. Tota, Kirie, and the rest of UQ HOLDER travel back in time in order to stop the attack from happening, but has their time already run out...?
KEN AKAMATSU is the best-selling creator of Negima!, one of the most popular manga series in America. It was selected by Kodansha for their prestigious "Manga of the Year" award. Negima! has been converted into an anime series that is popular in both the United States and Japan. Akamatsu lives in Tokyo.