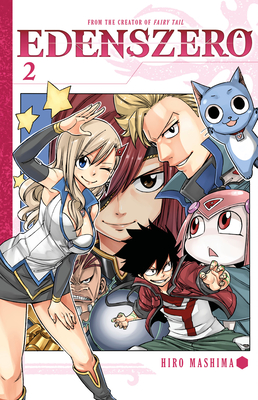 This is book number 2 in the Edens Zero series.

BLAST FROM THE PAST

Shiki, Rebecca, and Happy have gone to the planet Norma in the hopes of getting a bigger ship from an old friend, Professor Weisz. But when they get there, they see outdated technology and an unfamiliar city...and the only sign of the professor is a mysterious young man going by the same name. What's more, he's gotten himself into some trouble with the toughest gang on the planet--and neither side is going down without a fight!
One of the world's bestselling and most prolific comics artists, Hiro Mashima is the creator of the 63-volume magical epic Fairy Tail as well as its prequel Fairy Tail Zero, fantasy series Rave Master, the game spinoff Monster Hunter Orage, and a variety of other manga series and short stories.