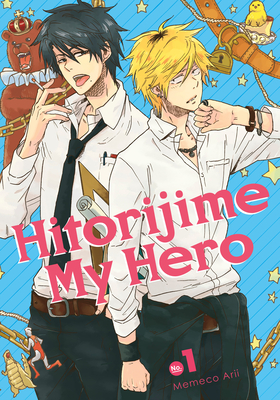 This is book number 1 in the Hitorijime My Hero series.

Holding Out For a Hero

Masahiro Setagawa doesn't believe in heroes, but wishes he could: He's found himself trapped in a gang of small-time street bullies, and with no prospects for a real future. But when high school teacher (and scourge of the streets) Kousuke Ohshiba comes to his rescue, he finds he may start believing after all...in heroes, and in his budding feelings, too.
Longtime yaoi author of Sweet Candy & Secret Man and Fight!! Lovely Apron, Arii's debut manga in English is Hitorijime My Hero, which was adapted into an anime in summer 2017.